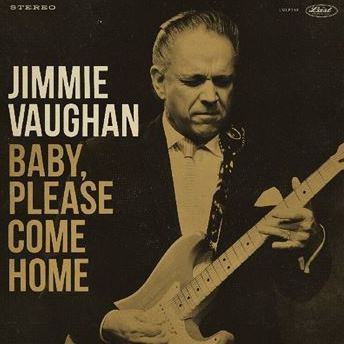 Lately, I’ve been listening to blues music quite a lot. In part, it’s thanks to fellow music blogger Music Enthusiast and his recent New Music Review that featured two excellent artists, Christone “Kingfish” Ingram and Big Daddy Wilson. The other part is my own curiosity, which led me back to the Billboard Blues Albums chart where the other day I had spotted a surprising entry: a collection of Fats Domino and Chuck Berry covers by George Benson. This time, I came across Baby, Please Come Home, another great covers album by an old hand of Texas blues: Jimmie Vaughan.

Other than the fact that Jimmie is the older brother of electric blues dynamo Stevie Ray Vaughan, one of my long-time favorite blues guitarists, admittedly, I knew next to nothing about Jimmie, so had to read up a little. But that happens to be one of the aspects I particularly enjoy about music blogging – learning about new artists and their music. Yes, this can be time-consuming, but I’m not in a hurry. Most importantly, it would be far less fun if I would only write about stuff I knew!

Jimmie Vaughan was born on March 20, 1951 in the Dallas area, about three and a half years prior to his brother Stephen Ray. He started playing the guitar as a child and in fact inspired his younger brother to pick up the instrument as well. At the age of 19, Jimmie moved to Austin and played in different blues bar bands for some time. In 1972, he formed his own group, The Storm, which backed many touring blues artists. Two years later, he co-founded The Fabulous Thunderbirds with harmonica player Kim Wilson. While the T-Birds gained a strong fan base in Texas, their first four albums didn’t sell well, and by the end of 1982 their record company Chrysalis had dropped them.

Meanwhile, Stevie Ray Vaughan broke through and became a dominating force in the Texas and national blues scene. It took the T-Birds until 1986 to score a success with their fifth studio album Tough Enuff. The record featured more of a mainstream sound, an approach the band replicated on their next two albums. Unhappy about the commercial direction the T-Birds had taken, Jimmie left in 1990 and recorded an album with his brother, Family Style. It came out one month after Stevie Ray’s untimely death in a helicopter crash under the name The Vaughan Brothers.

Jimmie’s solo debut Strange Pleasure appeared in 1994. He hasn’t been exactly prolific since then, sometimes leaving many years in-between releasing new studio records and focusing on touring and guest-appearing on albums by other artists. Baby, Please Come Home, which was mostly recorded at Fire Station Studio in San Marcos, Texas, came out on May 17 on the Last Music Co. label. It features deeper cuts from a variety of different artists, such as Lloyd Price, T-Bone Walker, Etta James, Fats Domino and Jimmy Reed. Let’s get to some music.

Here is the opener and title track of the album. The tune was written by Lloyd Price and released as a single in 1955. Often called “Mr. Personality,” after his 1959 million-seller Personality, the R&B singer from Louisiana is also known for Lawdy Miss Clawdy, a song he recorded in 1952, featuring Fats Domino on piano. I just dig the horn section and the cool retro sound on Baby, Please Come Home, which is present throughout this 11-tune collection.

No One To Talk To (But The Blues) is a song by country music singer-songwriter Lefty Frizzell, which he recorded in 1957 as a single with country and rockabilly vocalist  Shirley Caddell, who later became known as Shirley Collie Nelson. From 1963 until 1971, she was married to Willie Nelson.

Another great tune, and frankly I could have selected any other track, is What’s Your Name?  That song was written by blues, R&B and rock & roll singer Chuck Willis and appeared as a single in 1953.

Next up: I’m Still In Love With You by T-Bone Walker, one of Vaughan’s guitar influences. Co-written by Walker and Charles Glenn, the ballad was released by Walker with Marl Young And His Orchestra in 1945. From what I have heard thus far, Jimmie is more of an old-style pre-Jimi Hendrix type blues guitarist whereas his younger brother clearly embraced the virtuosity and sound of Hendrix.

The last track I’d like to highlight is So Glad by Fats Domino, which first appeared on his 1963 album Walking To New Orleans. The song was co-credited to Domino and his musical collaborator Dave Bartholomew.

Commenting on the eclectic mix of tracks, Vaughan told Guitar World, “When I was young, I didn’t really pay much attention to categories of music. I just heard what I liked and decided to explore that. And that’s really what I’m still doing.” The result is a great-sounding. old style blues record I find very enjoyable. I also agree with one review I read that it was not Vaughan’s goal to make a hit record but simply play music he loves. That being said, the album is currently at no. 2 on the Billboard Blues Albums chart. No. 1, by the way, is Christone “Kingfish” Ingram with his eponymous debut – that 20-year-old blues guitarist and singer from Clarksdale, Miss is just dynamite!

Vaughan is going on the road starting June 19 in Atlanta, and playing what mostly look like smaller venues. Now, that could be fun – I know I’ve been saying I need to restrain myself investing in concerts, but seeing Vaughan up and close in some intimate venue probably would be a great experience! Some of the other dates include Cleveland (Jun 26); Austin, Texas (Jul 6); Boston (Jul 16); Washington, D.C. (Jul 20); Los Angeles (Aug 7); and San Francisco (Sep 11). The last current gig is in Dallas on Sep 21. The full schedule is here.