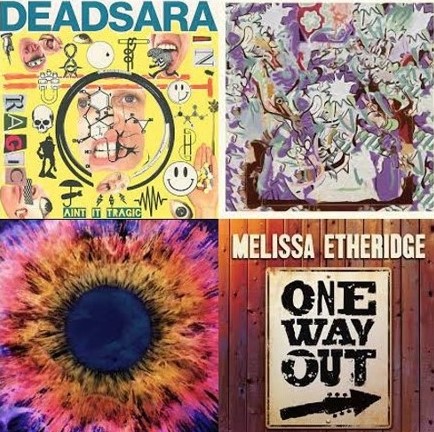 Welcome to the latest installment of my weekly recurring feature where I take a look at new music. In case you are a first-time visitor, my favorite decades in music are the ’60s and ’70s, and until March 2020 when I started Best of What’s New, I essentially had written off contemporary music. I’ve since realized that while the ’60s and ’70s won’t come back (d’uh!), I can still find some good new music if I look beyond the charts and do some digging.

Yes, discovering new music I reasonably like takes time – after all, my taste hasn’t really changed fundamentally. I still love the British invasion, blues rock, classic rock and ’70s soul, to name a few examples. As such, exploring contemporary music requires a certain degree of open-mindedness and to occasionally go beyond my comfort zone. Usually, it all results in picking artists who are entirely new to me.

This brings me to this week’s installment. Three of the featured four acts fall in the entirely-new-to-me category: Two rock bands and a psychedelic pop outfit. Yep, you can still find some psychedelic music! Interestingly, all three were formed in southern California. The fourth artist, who hails from Kansas and I believe also resides in California, represents the only kind of new music I listened to in the past, i.e., new releases by “old” artists. All tracks are from albums that were released yesterday (September 17). ‘Nuff said, let’s get to some music!

My first pick are Dead Sara, a rock band from Los Angeles. The group’s origins go back to 2002 when guitarists Emily Armstrong and Siouxsie Medley met as 16-year-olds and began writing songs together. In March 2005, they first performed as a band, calling themselves Epiphany. Later that same year, they changed their name to Dead Sara, a reference to Fleetwood Mac’s song Sara. Their debut EP The Airport Sessions appeared in 2008. Since the release of their eponymous first full-length album in April 2012, two additional albums have appeared, including the latest Ain’t It Tragic. In addition to Armstrong (lead vocals) and Medley (lead guitar, bass), Dead Sara’s current line-up includes Sean Friday (drums, guitar). Here’s All I Know is That You Left Me for Dead.

Mild High Club is a psychedelic pop outfit from Los Angeles around songwriter and multi-instrumentalist Alexander Brettin, who started the band in 2013. While the latest recording list additional musicians, I’m not sure there are other standing members. According to Apple Music’s profile, Brettin studied jazz guitar at Chicago’s Columbia College before deciding he was more interested in creating his own Steely Dan-inspired mix of jazz, pop, and psychedelia. Impressed by Brettin’s home recordings, Stones Throw Records head Peanut Butter Wolf [now that’s a name! – CMM] signed Mild High Club to the label in 2014. The group’s second album, 2016’s Skiptracing, received rave reviews for its dreamy, ’70s soft-pop vibe. Sketches of Brunswick East, Mild High Club’s 2017 jazz-oriented collaboration with psych-rockers King Gizzard & The Lizard Wizard [previously featured in Best of What’s New here – CMM], reached No. 4 on Australia’s Top Albums chart. This brings me to Mild High Club’s new album Going Going Gone and the track Dionysian State. I can definitely hear some Steely Dan in here. As a fan of the Dan, that’s definitely not a disadvantage!

On to Thrice, an American rock band formed in 1998 and yet another group from Southern California (Irvine). According to Apple Music, “Multi-genre rock band Thrice is one of the most notable groups of the 2000s post-hardcore/emo scene, with four of their albums topping the Billboard  Independent Albums chart.” Frankly, that was news to me! The band was founded by Dustin Kensrue (guitar, vocals) and Teppei Teranishi (lead guitar) while they were in high school. Teranishi brought in his friend Eddie Breckenridge (bass) who in turn asked his brother Riley Breckenridge to join on drums. A self-released EP in 1999 was followed by the group’s first full-length album Identity Crisis in June 2000. After seven additional albums and following a tour in the spring of 2012, Thrice went on hiatus. They reemerged in 2015 and have since released three additional albums including their latest Horizons/East. Here’s Northern Lights written by Kensrue – check out this neat sound!

Melissa Etheridge/As Cool As You Try

Time to wrap up this installment with a great blues rock tune by Melissa Etheridge from her new album. The American singer-songwriter and guitarist first entered my radar screen with her excellent eponymous debut album that came out in May 1988. Her raspy voice and great songs grabbed me right away. Fast-forward 33 years to One Way One, Etheridge’s 16h and new studio album. According to this review in Louder, it’s a collection of previously unreleased songs she wrote in the late ’80s and early ’90s. To realize the project Etheridge decided to reconnect with musicians who played on her early albums, including Kevin McCormick (bass), Fritz Lewak (drums) and John Shanks. Here’s As Cool As You Try, which was first released as an upfront track on August 19. This rocks!