Time again to go on some music time travel. For a change, this latest installment of my long-running music history feature around a specific date is skewed toward the ’80s. Usually, my favorite music decades the ’60s and ’70s rule these posts. Given it’s Valentine’s Day, I actually tried to discover a romantic song that was released on February 14, which I thought would be easy-peasy – well, not so. The closest I could find was an album that has various love songs. It’s part of the reason this post is more ’80s-focused.

1964: British beat group The Dave Clark Five released Bits and Pieces in the UK, the second single from their debut album Glad All Over. While it couldn’t quite match the chart success of the record’s title track that had knocked The Beatles’ I Want to Hold Your Hand off the top spot in the UK, the tune came pretty close, climbing to no. 2. Officially, Bits and Pieces was credited to the band’s leader, manager and drummer Dave Clark and lead vocalist and keyboarder Mike Smith, though British singer-songwriter Ron Ryan claimed he actually had penned the tune. Bits and Pieces also became a U.S. single on March 20 that year, peaking at no. 4 on the Billboard Hot 100. In this case, it beat Glad All Over, which had reached no. 6.

1970: Sly & The Family Stone hit no. 1 in the U.S. on the Billboard Hot 100 with Thank You (Falettinme Be Mice Elf Agin). Yes, the words in parentheses are actually written that way. According to Wikipedia, it’s an intentional so-called “sensational spelling” for “thank you for letting me be myself again.” Written by Sly Stone, this great funk tune was part of a double-A single with Everybody Is a Star. Both songs had been intended for a studio album that was subsequently canned. Instead, the tunes ended up on the compilation Greatest Hits that appeared in November of the same year. Thank You was ranked at no. 410 on Rolling Stone’s December 2003 list of the 500 Greatest Songs of All Time. That’s one hot funky tune!

1980: Heart released their fifth studio album Bébé le Strange, which became their highest charting on the U.S. Billboard 200 at the time, climbing to no. 4. Here’s the title track co-written by Heart co-founders Ann Wilson, Nancy Wilson and Roger Fisher, together with Sue Ennis, a frequent collaborator. By the time the album came out, Fisher had departed. Bébé le Strange also became the record’s second single but missed the Billboard Hot 100. Heart’s biggest chart success with their eponymous eighth studio album and the smash hit These Dreams was still five years away. I only know a handful of Heart’s songs and had not been familiar with this tune.

1985: Whitney Houston’s eponymous debut album appeared. After an initial slow response, the album started to get traction in the summer of that year and eventually topped the Billboard 200 for 14 weeks in 1986. It spawned various singles, including three no. 1 hits. Here’s one of them: Saving All My Love for You, co-written by Michael Masser and Gerry Goffin. While musically it’s a typical ’80s ballad, Houston’s vocals were just extraordinary. Plus, it’s a fitting tune for all the love birds celebrating today.

1987: Undoubtedly, some eyes are going to roll on this one. New Jersey rockers Bon Jovi hit no. 1 on the Billboard Hot 100 with Livin’ on a Prayer, their second chart-topper in the U.S. Co-written by frontman and lead vocalist Jon Bon Jovi, then-lead guitarist Richie Sambora and songwriter Desmond Child, Livin’ on a Prayer appeared on the band’s third studio album Slippery When Wet. It became an instant success in the U.S. and internationally and remains Bon Jovi’s best-selling album to date. While I wouldn’t call myself a fan, I think the band has some great songs. Okay, I have to say I much prefer how Jon Bon Jovi looks nowadays. But, hey, it was the hairy ’80s ! 🙂 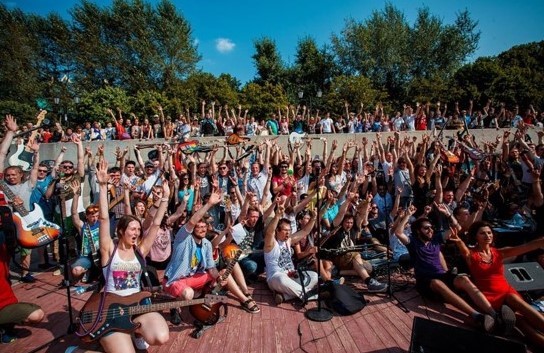 We are an explosive movement of the rock warriors from Russia, and we are melting our socks off with our Army of Rock!

Quite likely that for you Russia is just a cold country full of bears and vodka, and maybe you even heard that every Russian knows how to play balalyka. So, here we are to tell you a bit about our Army of Rock that performs live the world’s greatest rock hits. And, yeah, we do have a balalyka indeed, a really big one!

The above is an excerpt from the Facebook page of Rock-n-Mob, an “orchestra of more than 100 musicians” from Russia, including drummers, guitarists, bassists, keyboarders and vocalists. Established in 2016, Rock-n-Mob was inspired by Rockin’ 1000, a group from the Italian town of Cesena, which brought together 1,000 musicians in July 2015 to play simultaneously and in the process collect enough money to convince the Foo Fighters to perform a concert in that city close to the Adriatic Sea. The band accepted and did a 3-hour show on November 3, 2015, which was dedicated to Rockin’ 1000, as well as all the donors and volunteers involved in the July 2015 concert. Kudos to the Fighters!

I just love that story, even in case it’s a bit embellished. It just goes to show once again the potential power of music to bridge continents and even different political systems. Russia may be run by a dictator and crook who suppresses freedom of expression and won’t hesitate to intervene in foreign elections to manipulate outcomes. But that’s very different from the Russian people, many of whom have the same dreams and aspirations than we do in the West – and love rock music!

Even when rock was considered to be subversive and therefore officially forbidden under the Communist regime in the former Soviet Union, rock was alive and kicking there. Fans found creative ways to listen to The Beatles, The Rolling Stones and other Western bands they dug.

Listen up, all you crooked dictators, whereever you may be, your days are counted and rock & roll will outlive you! With that being said, let’s get to some music from Rock-n-Mob! All of the following tunes were performed in Moscow. Let’s kick it off with a rendition of Michael Jackson’s Beat It, which happened last September. Written by Jackson, the great tune appeared on Thriller, his sixth studio album from November 1982, which to this day remains the word’s top-selling record with 47.3 million units sold.

Next up: Livin’ On A Prayer by Bon Jovi, performed in May this year. I know some rock fans cringe when they hear the name of this artist and band. I’ve said it before and I say it again. I think these guys have written some great songs, which nicely combine rock with pop elements. Livin’ On A Prayer, one of my favorite Bon Jovi tunes, is from their third studio album Slippery When Wet, which was released in August 1986. Like most tracks on the record, it was co-written by frontman Jon Bon Jovi, guitarist Richie Sambora and collaborator, American producer and songwriter Desmond Child.

And since this post is about celebrating rock & roll, I thought why not throw in anthem I Love Rock ‘n’ Roll, which is best known by Joan Jett & the Blackhearts. This performance was captured in July 2017. The tune was co-written in 1975 by Alan Merrill and Jake Hooker, who recorded it with English American rock band Arrows. Jett first learned about the tune in 1976 and initially recorded a version with Steve Jones and Paul Cook, two members of Sex Pistols. She subsequently re-recorded the tune with the Blackhearts in 1981, making it the title track of the band’s second studio album that came out in November that year – and scoring a no. 1 on the U.S. Billboard Hot 100.

There are many other rock songs Rock-n-Mob have performed. Obviously, I can’t cover all of them. I’d like to leave you with one more track from August 2016, which I feel is a great motto for this remarkable group: The Show Must Go On by Queen. Credited to all members of the English rock band, the song appeared on Queen’s 14th studio album Innuendo from February 1991. This was the final record released during the lifetime of  Freddie Mercury, who had been diagnosed with AIDS in the spring of 1987 and passed away nine months after the album’s release from AIDS-derived bronchopneumonia.

Rockin’ 1000 seems to continue being active. And apparently, the concept of these massive rock orchestras of the people is catching on elsewhere. The other day on Facebook, I saw a group from The Netherlands called De Grootste Band Van Nederland playing a great version of Neil Young’s Rockin’ In The Free World. This gives me hope. Rock may no longer be mainstream and selling many albums, but it sure as heck ain’t dead.