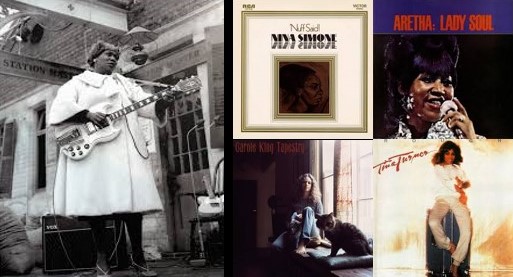 The idea behind this two-part post was inspired by fellow blogger Lisa, aka msjadeli, a talented poet who also likes great music. Throughout this month, she’s doing “Women Music March,” a series I’ve been enjoying. If you haven’t done so, I encourage you to check it out. While female artists aren’t a novelty in my blog, the closest I previously came to celebrate their music in a dedicated fashion were two posts on ladies singing the blues. You can find them here and here. Female talent certainly isn’t limited to the blues. This two-part post includes ten of the many female music artists I admire.

It’s also good timing to recognize female music artists in a dedicated way. March happens to be Women’s History Month, a celebration of contributions women have made and are making to society. Obviously, music is an important part of this, and some of the artists I feature were true trailblazers. Initially, I had planned to include all of my 10 selections in one post but quickly realized it made more sense to break things up. Here’s the first of two installments.

Sister Rosetta Tharpe who started playing the guitar as a four-year-old and began her recording career at age 23 in 1938 was a prominent gospel singer and an early pioneer of rock & roll. Playing the electric guitar, she was one of the first popular recording artists to use distortion. Her technique had a major influence on British guitarists like Eric Clapton, Jeff Beck and Keith Richards. She also influenced many artists in the U.S., including Chuck Berry, Elvis Presley, Little Richard and Jerry Lee Lewis, to name a few. After Elvis had seen her being backed by vocal quartet The Jordanaires, he decided to work with them as well. Tharpe has been called “the original soul sister” and “the godmother of rock & roll.” Unfortunately, her health declined prematurely and she passed away from a stroke in 1973 at the untimely age of 58. In May 2018, Tharpe was inducted into the Rock & Roll Hall of Fame as an Early Influence. Here’s Strange Things Happening Everyday, a traditional African American spiritual that became a hit for Tharpe in 1945. This recording is historic, as it’s considered to be one of the very first rock & roll songs. Tharpe’s remarkable guitar-playing, including her solos, distorted sound and bending of strings, is more pronounced on later tunes, but you can already hear some it here. This lady was a true early rock star and trailblazer!

Born Eunice Kathleen Waymon in Tyron, N.C. in February 1933, Nina Simone was the sixth of eight children growing up in a poor family. She began playing the piano at the age of three or four. After finishing high school, she wanted to become a professional pianist, so she applied to Curtis Institute of Music in Philadelphia. When they rejected her, she decided to take private lessons. In order to pay for them she started performing at a night club in Atlantic City, N.J. The club owner insisted that she also sing, which ended up launching her career as a jazz vocalist. In February 1959, Simone’s debut album Little Blue Girl appeared. It was the start of an active recording career that lasted for more than 30 years until 1993. Afterwards she lived in Southern France and died there in April 2003 at the age of 70. Here’s Ain’t Got No, I Got Life, a medley of the songs Ain’t Got No and I Got Life from the musical Hair, with lyrics by James Rado and Gerome Ragni, and music by Galt MacDermot. It appeared on Simone’s 1968 album ‘Nuff Said and became one of her biggest hits in Europe.

“Queen of Soul” Aretha Franklin, who was born in Memphis, Tenn. in March 1942, began singing as a child at a Baptist church in Detroit, Mich. where her father C.L. Franklin was a minister. The Reverend began managing his daughter when she was 12 years old. He also helped her obtain her first recording deal with J.V.B Records in 1956, which resulted in two gospel singles. After Franklin had turned 18, she told her father she wanted to pursue a secular music career and moved to New York. In 1960, she signed with Columbia Records, which in February 1961 released her debut studio album Aretha: With The Ray Bryant Combo. Thirty-seven additional studio recordings followed until October 2014. In 2017, she came out of semi-retirement for a planned short tour. I had a ticket to see her in Newark on March 25, 2018, her 76th birthday. Unfortunately, it wasn’t meant to be. A few months prior to the gig, it was announced Franklin’s doctor had put her on bed rest and that all remaining shows of the tour were canceled. In August 2018, Aretha Franklin died from pancreatic cancer at the age of 76. Here’s (Sweet Sweet Baby) Since You’ve Been Gone, a great soul tune co-written by Franklin and Ted White, her first husband and manager from 1961 until 1968. It was included on her 12th studio album Lady Soul released in January 1968.

More frequent visitors of the blog know how much I admire Carole King. With the recent 50th anniversary of Tapestry, I’ve written extensively about her. Before releasing one of the greatest albums in pop history in 1971 at age 29, for more than 10 years, King wrote an impressive array of hits for many other artists, together with her lyricist and husband Gerry Goffin: Will You Still Love Me (The Shirelles), Take Good Care of My Baby (Bobby Vee), The Loco-Motion (Little Eva), One Fine Day (The Chiffons), I’m Into Somethin’ Good (Herman’s Hermits), Don’t Bring Me Down (The Animals), Pleasant Valley Sunday (The Monkees) – the list of Goffin-King hits goes on and on. This songwriting duo helped shape ’60s music history. They were rightfully inducted into the Songwriter’s Hall of Fame in 1987. King is also currently nominated for the Rock & Roll Hall of Fame. While given her general modesty I imagine she doesn’t even care much about it, it’s just mind-boggling to me why this extraordinary artist wasn’t inducted decades ago! If you share my sentiments and like to do something about it, you can go to rockhall.com and participate in the fan vote. You can do so every day between now and April 30. King is currently trailing in sixth place. Only the first five will be included in the fan vote tally, so she definitely could need some support! To celebrate another true trailblazer in music, let’s get the ground shaking with I Feel the Earth Move from Tapestry!

What can I say about Tina Turner? Where do I even begin? The Queen of Rock & Roll wasn’t only one of the most compelling live performers, as I had the privilege to witness myself on two occasions. She’s also one of the ultimate survivors. Her initial role as front woman of Ike & Tina Turner brought her great popularity but came at a terrible price. Physically and emotionally abusing your woman wasn’t cool, Ike, and will forever tarnish you. And look what happened after Tina walked out on you on July 1, 1976 with 36 cents and a Mobil credit card in her pocket. She launched a successful solo career, while you struggled. At the time Tina was inducted into the Rock & Roll Hall of Fame in 1991 as part of Ike & Tina Turner, you were in prison – ’nuff said! BTW, Turner is also among the 2021 nominees – this time as a solo artist. Currently in second place in the fan vote, she would certainly deserve a second induction. Here’s The Bitch Is Back from Turner’s first solo album Rough, released in September 1978 after her divorce from pathetic wife beater Ike Turner. It almost sounds like she was giving him the middle finger! Co-written by Bernie Taupin (lyrics) and Elton John (music), the tune first appeared on John’s eighth studio album Caribou from June 1974.