I just spotted a Rolling Stone piece about Paul McCartney ending his Freshen Up tour at Los Angeles’ Dodgers Stadium last night, which includes some cool footage I simply couldn’t resist sharing. Not only does 77-year-old Sir Paul look in admirable shape, but he also got a little help from some great friends.

First up: Sir Richard Starkey, who just turned 79 years old. Don’t get me wrong here, I’m the first to emphasize that age doesn’t need to be a limiting factor when it comes to music and many other things. Still, you just can’t escape but feel amazed watching these two guys close to 50 years after the split-up of The Beatles: Sgt. Peppers Lonely Hearts Club Band (Reprise) and Helter Skelter. What a triumph!

But wait, there is more. A Paul McCartney show ain’t over until, well, the end. So here it is: Golden Slumbers/Carry That Weight/The End. Watch what happens at around 3 minutes and 48 seconds into the closing medley from Abbey Road. Undoubtedly, life’s been good for that audience last night. How friggin’ cool!

During the more than 25 years since I first saw Paul, he has not lost any of his magic! 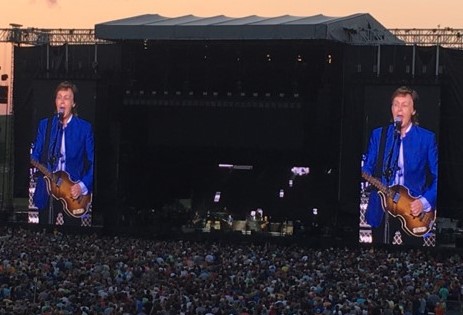 Yesterday (July 19), the wait was finally over – Paul McCartney’s show at Hersheypark Stadium in Hershey, Pa. was simply amazing. There couldn’t have been a greater kick-off to my summer concert season!

Another highlight was that I enjoyed the show together with my 14-year-old. It was his first big concert!

From the opening chord of A Hard Day’s Night – the first time Paul performed this classic tune during a solo tour – to The End, Sir Paul gave it his all. And his all is still pretty magic! He certainly did not look or behave like a 74-year-old!

For almost three hours, Paul took the audience on an amazing journey through Beatlemania, Wings and his long solo career. Best of all, he really did appear to have a lot of fun doing so, and his joy to perform came across!

Of course, there were crowd-pleasers you’d expect like Hey Jude, Let It Be, Band On the Run and Live And Let Die, which were awesome. Other highlights included Maybe I’m Amazed, Letting Go and Nineteen Hundred And Eighty-Five.

But to me, the true standouts were the acoustic guitar pieces, such as Blackbird, Here Today and of course Yesterday. I’ve always loved Paul solo with just his acoustic guitar. He also threw in a great version of George Harrison’s Something, playing the first part of the song on a ukulele George had given to him many years ago before the band launched into the widely known version from Abbey Road.

Moreover, Paul played some songs by The Beatles I didn’t necessarily expect, such as Love Me Do, You Won’t See Me, And I Love Her and especially Being For the Benefit of Mr. Kite!

Another surprise to me was Paul’s direct engagement with members of the audience. He asked a young girl on stage who had drawn a poster for him and signed it. July 19 happened to be her birthday – the coolest present ever, I suppose!

Paul also called a teacher on stage with a sign that asked, ‘Could you sign this for show and tell?’ He ended up signing two autographs on one of her arms! I guess taking showers just became more complicated for the teacher!

I would also like to share a funny anecdote that happened the next day. Together with my son, my wife had come along, and we decided to stay overnight close to Hershey and turn the concert visit into a mini-vacation.

So the next day we visited Hershey’s Chocolate World where we went on a historic trolley tour around town. The tour guide was a cheerful 18-year-old, who also apparently happened to be a big Beatles fan. So he started talking about the show, noting the Höfner bass Paul used was his second such instrument from 1963. His first had been stolen. He added he also he really wanted Paul to play Help, so he started shouting ‘Help, Help’ during the concert. Very quickly people around him had concerned looks on their faces and started asking him whether he was okay!

Last but not least, I’d like to acknowledge Paul’s fantastic band. Guitarists Rusty Anderson and Brian Ray, who also plays bass on some of the songs; keyboarder, Paul Wickens; and drummer, Abe Laboriel, Jr. did an outstanding job backing up Paul!

Just like my first Paul McCartney concert I saw in Germany in the late ’80s, I will undoubtedly remember last night’s show for a long time! To all Paul McCartney and Beatles fans who haven’t done so yet, go and see Sir Paul if you get a chance. It will be one of your most memorable experiences that will stay with you for many years!