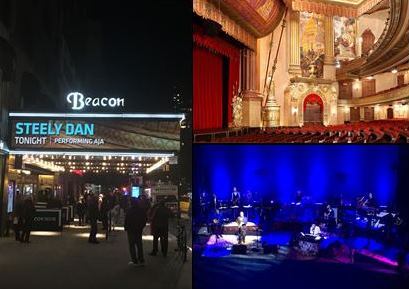 Usually, I don’t see the same music act twice in just three months, even if I dig them. There are so many other artists on my list, plus ticket prices nowadays would simply make this unaffordable. But while I was still raving about a Steely Dan show I caught in July (see review here) I learned about their October residency at The Beacon Theatre in New York City. And when I noticed it would include a special performance of my all-time favorite Steely Dan album Aja, I immedeidately knew I wouldn’t want to miss it – especially after the summer gig had convinced me that Donald Fagen is still on top of his game contrary to some less than flattering reviews I had read. Finally, Thursday night, it was time for the expanding man, and what a night it was!

To start with, I had never been to The Beacon Theatre, even though I’m a longtime music fan and would have had plenty of opportunity for the past 20 years or so – I can’t quite explain why! When I mentioned it to my friendly seat neighbors and huge Steely Dan fans – a dad and his son who had come all the way from England to see this show and another special performance tonight of Donald Fagen’s first solo album The Nighfly, the dad jokingly said, ‘you must have been very busy.’ 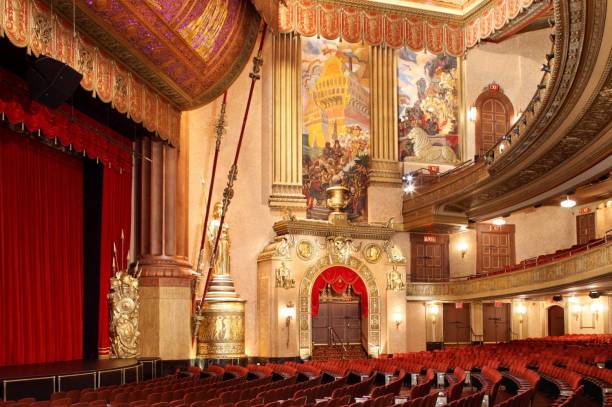 He certainly had a point. After all, this beautiful historic venue (pictured above) on Manhattan’s Upper East Side has featured many top-notch acts over the decades, perhaps most notably The Allman Brothers Band. For about two decades, the southern blues rockers had a residency there each spring. I actually recall that in ca. 1998, a former colleague and Brothers fan told he was going to see them there.

This brings me to another dark issue of my music past – gee, this starts feeling a bit like I’m writing a confession! At the time my former colleague told me about the above Brothers show, Ramblin’ Man was pretty much all I knew about the band. It really wasn’t until three years ago or so that I explored The Allman Brothers Band I greater depth and quickly became a fan – luckily in time to at least see them once in an unforgettable performance, though not at the Beacon but at PNC Bank Arts Center in Central New Jersey. Well, to both I say better late than never, plus you can’t change the past! On the show.

An excellent jazz trio featuring organ (Hammond), guitar and drums opened the night. Unfortunately, I didn’t catch their name. While I don’t mind listening to jazz, I wouldn’t call myself a fan. So how come I like Steely Dan you might ask? Well, because jazz is just one aspect of their music, albeit an important one, especially on Aja. Perhaps more importantly, music taste isn’t always rational. Regardless how I usually feel about jazz, these three guys really grabbed me. I guess Donald Fagen, who is known for being a perfectionist, likely wouldn’t approve of some amateurs to open his show, and amatuers these guys were definitely not! And that I can easily get mesmerized by the mighty sound of a Hammond also didn’t hurt. When that organ player held the keys in the vibrato setting and the air in the place started to pulsate, I just got goosebumps – I could have listened to him all night!

Finally, the time has come to get to Steely Dan. The first half of their set was reserved for the Aja album, which the band performed in its entirety, following the order of the tracks on the studio recording. The remainder of the show featured select gems from other Dan records, one track from The Nightfly, as well as a couple of covers. The full set list is here. The song collection was really a treat for Steely Dan fans!

Released in September 1977 as their sixth studio album, Aja remains the crown jewel in Dan’s catalog, in my opinion. Like for most of their records, all tracks were written by Donald Fagen and Walter Becker. Fagen and his top-notch band did an outstanding job capturing Aja’s rich sound in all of its glory. Following are a few clips. Light conditions proved to be challenging, and some of the footage is out of focus, but I’d be amiss not to include some of it – sue me if I write too long!

First up: My all-time favorite Steely Dan tune, which they didn’t play back in July.

Next is Home At Last. Love the groove of that song. Check out the mighty four-piece horn section and the beautful backing vocals by The Danettes – it’s just perfect!

And here is the album’s closer Josie. As a former bass player, I’ve always loved the cool bassline on that tune. You may need more than my crappy labtop speakers to fully hear it!

Following are a few clips from the concert’s second half. First up: The epic Hey Nineteen from Gaucho, Dan’s seventh studio album released in November 1980. It was their last effort before they disbanded in June 1981 and went on a 20-year recording hiatus. One of the highlights in the clip is the extended trombone solo by Jim Pugh that starts at about 4:08 minutes.

Here’s The Goodbye Look, the above mentioned track from The Nightfly, which became Donald Fagen’s acclaimed solo debut in October 1982. Like all the other tracks on the record except for one, the tune with a laid back Caribbean groove was written by Fagen.

And, since all things must pass, the last song I’d like to highlight is Reelin’ In The Years. I simply couldn’t skip this classic from Steely Dan’s November 1972 debut Can’t Buy A Thrill, even though I also featured it my previous post about the July gig. I just love the great guitar work by Jon Herrington and the cool drum solo by Keith Carlock. These guys are just top-notch, demonstrating how great music can sound like! I think it’s also nice to see the traditionally reserved Fagen get animated after the end of the drum solo.

After repeatedly raving about the band, I’d like to acknowledge the members. As far as I could tell, the lineup was the same than during the aforementioned summer gig: Apart from Herrington, Carlock, Pugh and obviously Fagen, it included Freddie Washington (bass), Walt Weiskopf (tenor sax), Roger Rosenberg (baritone sax), Michael Leonhart (trumpet) and The Danettes (backing vocals): La Tanya Hall, Catherine Russell & Carolyn Leonhart.

If you’re a fan and can make it, I’d say go and see them. And, did I mention it’s a great opportunity to visit one of New York’s iconic performance venues?