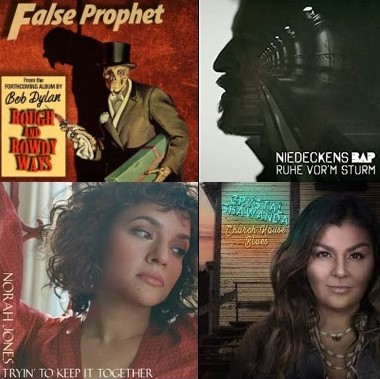 This latest installment of the recurring feature presents yet another new tune by Robert Allen Zimmerman, who finally revealed there will be a new album with original music, probably providing some relief among die-hard Bob Dylan fans. The piece also includes a new song by a German singer-songwriter who happens to be a yuge Dylan fan and has led my favorite German rock band for more than 40 years. There’s also a melancholic track by Norah Jones. And how about rounding out things with some smoking hot blues by an indigenous artist from Canada? Let’s get to it.

False Prophet, released today, is the third new song by Bob Dylan that appeared in recent weeks. He probably thought three make a charm and also finally confirmed what many fans had hoped for: All these tunes appear on a new album, Rough and Rowdy Ways, set to come out on June 19. It’s Dylan’s 39th studio album, per Rolling Stone’s count, and his first release of original music in eight years since Tempest from September 2012. False Prophet, a guitar-driven bluesy tune, definitely speaks to me more than the previously released I Contain Multitudes and the nearly 17-minute Murder Most Foul. In fact, I kinda like it!

BAP or, since September 2014, Niedeckens BAP have been my favorite German rock band for now close to 40 years. I’ve covered this group from Cologne around singer-songwriter Wolfgang Niedecken on various past occasions, most recently here. One of their characteristic features is they sing all of their songs in Kölsch, the regional dialect spoken in the area of Cologne. Ruhe vor’m Sturm (calm before the storm), the first tune from the band’s next album scheduled for September, has rather dark lyrics, drawing a bridge between Germany’s past Nazi era and the growing influence of right-wing extremist ideology in Germany and other countries. “Everything that has happened in previous years, the populists that step by step are gaining power and those who are still in their starting positions…are developments that can frighten you and make you think, ‘how is it supposed to continue’,” said Niedecken during an interview with German broadcast station SWR1. “I’ve had many sleepless nights. I have now grandchildren…and don’t simply want to say, ‘ do whatever you want’ – I won’t accept that.” Niedecken who writes all of the band’s lyrics has spoken up against racism for many years. The song was deliberately released today, the 75th anniversary of Germany’s unconditional surrender to the Allies and the official end of World War II and one of the darkest chapters in human history.

Norah Jones/Tryin’ to Keep It Together

Every time I listen to Norah Jones, which for some reason I hardly do, I somehow feel at ease. There’s just something about the singer-songwriter’s voice I find incredibly powerful. Tryin’ to Keep It Together is a bonus tune on Jones’ upcoming eighth studio album Pick Me Up Off the Floor, which will appear on June 12. “I didn’t intend on releasing it early, but it kept running through my head,” said Jones in a statement, as reported by Rolling Stone. “It’s very much how I feel in this moment, so it felt appropriate to release it. Maybe it’s how others feel as well.” The song was co-written by Jones and Thomas Bartlett, a.k.a Doveman, who also produced it. Jones released the official video for the tune today. In a tweet she wrote, “The official video for ‘Tryin’ To Keep It Together’ was filmed at home and is out now. Thanks to my quaran-team house-mate, Marcela Avelar, for making this video.”

Crystal Shawanda is an indigenous country-turned-blues artist. According to her website, she grew up on Wikwemikong reserve on an island in Ontario, Canada. While her parents exposed her to country music and taught her how to sing and play guitar, her oldest brother introduced her to what became her ultimate passion, the blues. She started her career in country music and her debut album Dawn of a New Day was released in June 2008. But while country music apparently brought her some success, she started feeling like a fish out of water and decided to take off some time. Shawanda returned in September 2014 with her first blues album The Whole World’s Got the Blues. Her new record Church House Blues was released on April 17. According to this review in Glide Magazine, it was produced by Shawanda’s husband and collaborator Dewayne Strobel, who also plays guitar on the record. The review notes influences from Shawanda’s heroes Etta James, Koko Taylor, The Staple Sisters and Janis Joplin. Regardless whether you agree with their take or not, one thing is crystal clear to me: That woman has mighty pipes and great energy. Check out the title track!