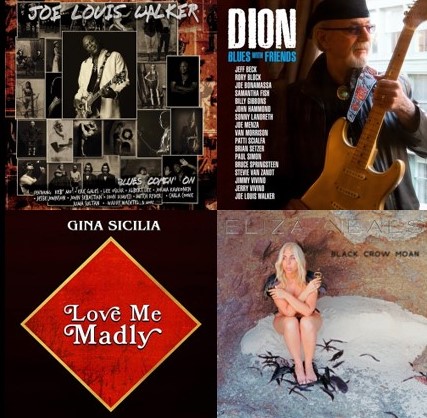 I could have called this latest installment of the recurring feature best of what’s new in blues. If you’re a more frequent visitor of the blog, you may have read this sentiment before: In my opinion, unlike classic rock, the blues remains as vibrant as ever. And this, my friends, makes me a very happy camper!

Are you ready for some good ole’ blues, featuring three veterans and three younger female artists? Ready or not, here we go! Coz, to creatively borrow from the American blues artist who was known as Little Milton, hey, hey, the blues is alright, alright (alright), alright (alright) every day and night.

How can you go wrong with a guy named Joe Louis Walker and a tune called Blues Comin’ On? From his web bio: Joe Louis Walker, a Blues Hall of Fame inductee and four-time Blues Music Award winner celebrates a career that exceeds a half a century…A true powerhouse guitar virtuoso, unique singer and prolific songwriter, he has toured extensively throughout his career, performed at the world’s most renowned music festivals, and earned a legion of dedicated fans…Born on December 25, 1949 in San Francisco, at age 14, he took up the guitar. Just two years later, he was a known quantity on the Bay Area music scene, playing blues with an occasional foray into psychedelic rock. For a while, he roomed with Mike Bloomfield, who introduced him to Jimi Hendrix and the Grateful Dead. Okay, I have to say I feel a bit ignorant that I don’t recall having heard of this blues veteran before who released his debut Cold Is the Night in 1986. Blues Comin’ On, which features Eric Gales and Dion DiMucci, is the title track of his most recent 26th album that was released on June 5. Dion co-wrote the tune with Mike Aquilina and included his own version on his Blues With Friends album, which interestingly also came out on June 5.

Obviously, I couldn’t ignore the above noted Blues With Friends by “The Wanderer” Dion, who after a 63-year career is still marching strong. With those friends including the likes of Jeff Beck, Billy Gibbons, Sonny Landreth, Brian Setzer, Joe Louis Walker and Bruce Springsteen, this surely looks like a killer album! Dion has been active since 1957 and is turning 81 years on July 18 – holy cow, how many other artists can you name with such a long career! And, boy, does he still sound great! “Great songs, great guitarists. What more do you need?” is how Dion confidently summed up the record in a statement. Here’s Bam Bang Boom featuring Billy Gibbons. “Billy Gibbons was a joy to work with on this,” noted Dion in the same statement. “There’s nobody like him.” This surely sounds sweet – damn!

Gina Sicilia is a 35-year-old singer-songwriter hailing from Newtown, Pa. Characterizing her music as blues, roots, Americana, soul and R&B, Wikipedia notes Sicilia began singing at 6 years old performing at local talent shows and by the age of 12 she began writing songs. At 14 years old she became interested in blues and classic soul music and decided to pursue singing in that genre. Sicilia’s debut album Allow Me to Confess came out in 2007. She has since released eight additional albums. Love Me Madly is her most recent, which appeared on May 29. Here’s the soulful title track, co-written by her and the album’s producer Cody Dickinson. He is also a member of North Mississippi Allstars, a Southern blues rock band he formed together with his brother Luther Dickinson. I really dig Sicilia’s vocals. Gosh, I can hear some Anita Baker in here!

Here’s another female performer with a compelling voice: 34-year-old Dani Wilde from the village of Hullavington, England. Well, whatever they may have in their water there, it doesn’t seem to damage the vocal chords! According to her website, Over the past 10 years Blues and Country singer-songwriter Dani Wilde has performed at thousands of venues and festivals across Europe, America, Canada and Africa; from the main stage at London’s Royal Albert Hall, to the slum communities of Kenya, to Times Square – New York City…In September 2015, Wilde was awarded ‘Best Female Vocalist” at the British Blues Awards. Wilde has released four studio solo albums to date, starting with Heal My Blues in 2008. Written by Wilde and released on May 6, Brave his her latest single. The tune is dedicated to healthcare professionals and other essential workers around the globe. “I wanted to maintain the organic raw emotion of the blues whilst also taking inspiration from traditional popular song arrangements,” Wilde told Blues Matters. “I love how artists like Patty Griffin, Paul Simon and John Mayer take the blues but fuse it with Americana and popular song to create something beautiful.”

From her website: Eliza Neals is a prolific songwriter, confident producer, arranger, bandleader, pianist, and one-of-a-kind live performer…Eliza’s history of performing/opening for legendary musicians goes back many years from Detroit’s songwriting godfather Barrett Strong to George Clinton, The Four Tops, Kenny Olson, Mike Zito, Tommy Castro, Walter Trout, Poppa Chubby, Albert Castiglia,  Micki Free, Victor Wainwright and recently Blues Foundation HOF man Joe Louis Walker. Kind of ironical – until today, I had not been aware of Walker, and now he seems to be everywhere. I suppose this only confirms my prior ignorance! Black Crow Moan is the title track of Neals’ most recent studio album that was released on April 6; if I interpret it correctly, it’s her seventh. And, yes, you guessed it correctly, the tune features Walker – okay, keep rubbing it in my face!

Mick Clarke/Snappin’ at Your Heel

Let’s wrap things up with another blues veteran: British blues guitarist Mick Clarke, who began his career in 1968 as co-founder of blues rock band Killing Floor. They recorded two albums until their break-up in mid-1972. In 2002, the original line-up reunited. The band remains active with Clarke and Bill Thorndycraft (vocals, harmonica) as original members. During the ’70s, Clarke was also involved in two other bands, Salt and Ramrod, before forming The Mick Clarke Band in the early ’80s. His first solo album Looking For Trouble came out in 1986. Snappin’ at Your Heel is from Clarke’s most recent album Big Wheel released on April 17.

Over the weekend, I came across this smoking hot soulful boogie rocker Soul Shake performed by Tommy Castro & The Painkillers. If this doesn’t get you moving, frankly, I don’t know what will!

Apparently co-written by songwriters Margaret Lewis and Mira Ann Smith, the tune was first recorded by Peggy Scott and Jo Jo Benson in 1969. It was also covered by Delaney & Bonnie on their fourth studio album To Bonnie From Delaney, released in September 1970.

Castro & The Painkillers included the song on Stompin’ Ground, their most recent studio album that appeared in September 2017. I understand the entire record is soul-oriented rock, which sounds like right up my alley, so I’m going to further check it out.