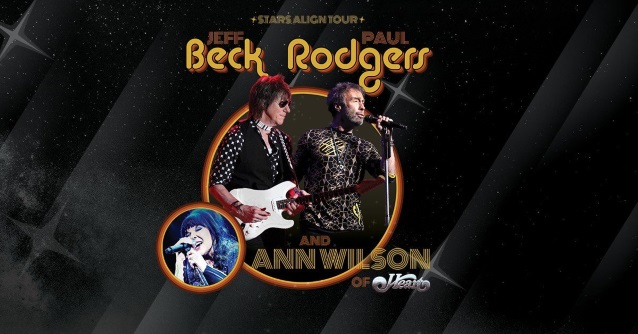 One could be forgiven to a bit cynical about the concept: Take three artists who had their prime years in the ’70s, throw ’em together and boldly call it the Stars Align Tour. Admittedly, I couldn’t entirely escape this notion when I saw that Ann Wilson, Paul Rodgers and Jeff Beck announced their tour, which kicked off on July 18 in West Valley City, Utah. Then I read some reviews and watched some clips on YouTube – well, let’s just say I wasn’t turned off by what I saw and just got a ticket for August 12 at my go-to concert venue PNC Bank Arts Center in Holmdel, N.J., and for very reasonable money I should add.

I guess I shouldn’t have been surprised in the first place. After all, the success or failure of the three-in-one concept crucially depends on the featured artists. At 74, Beck seems to continue to defy age, not only with his looks but much more importantly with his guitar-playing. Okay, you might say, compared to 82-year-old Buddy Guy, Beck’s still an adolescent. But let’s not kid ourselves, rock & roll is a brutal business. On top, I can’t imagine Beck lived a particularly healthy life style. Speaking of Guy and Beck, I saw these two guitar dynamos in a double-header in July 2016 at the above venue, and it was a terrific show, so my expectations for the upcoming gig are high – now you better bring it, Beck! 🙂

As for Rodgers, I had actually hoped he and Bad Company would be part of the June 22 Lynyrd Skynyrd farewell show I caught at – yes, you guessed it correctly – PNC. Given how many freaking shows I’ve seen there, perhaps I should apply for an honorary membership! 🙂 Leading up to the Skynyrd gig, I had read somewhere that Bad Company would be among the special guests that night. So I was full of anticipation and quite disappointed when it turned out they weren’t part of the lineup. I suppose that was another good reason to get a ticket for the Stars Align Tour. Looking at setlists from recent gigs, Rodgers is playing a nice mix of Bad Company and Free stuff. And his rock pipes still seem to be working nicely!

And then there’s Wilson. While I don’t want to pretend I’m a Heart expert, based on their music I know, I’m well aware of Wilson’s vocal capabilities. Barracuda is a nice showcase of what she can do. As an aside, Ann’s older sister Nancy Wilson is a kick-ass guitarist, but she’s not part of the tour. Interestingly, as reported by Ultimate Classic Rock and other media outlets, Ann’s set only includes one Heart tune, the aforementioned Barracuda. The remainder are all covers, and there’s some great stuff there, such as The Who’s The Real Me, The Black Crows’ She Talks To Angels and the Eagles’ Life In The Fast Lane.

Okay, time for a few clips. Here’s Wilson’s rendition of Life In The Fast Lane. She took some creative liberties with the tune, which was co-written by Joe Walsh, Glenn Frey and Don Henley and appeared on the Eagles’ Hotel California album from December 1976. It’s quite different from the original, but I think it’s a cool take.

As noted above, Rodgers’ set nicely draws from Bad Company and Free. Here’s the latter band’s signature tune All Right Now. Penned by Rodgers with Free bassist Andy Fraser, the song is from their third studio album Fire And Water, released in June 1970. It also appeared separately as a single. It’s one of these timeless straight rockers with a cool guitar riff that still sound great to this day!

Last but not least, here’s a cool clip of Beck performing one of the few originals from his set, Brush With The Blues, which he co-wrote with Tony Hymas. The tune appeared on his seventh studio album Who Else! from March 1999.

Wilson, Rodgers and Beck are playing Boston tonight. Next they are taking the Stars Align Tour to Camden, N.J. (Aug 4), Cincinnati (Aug 8) and Indianapolis (Aug 10). The tour will wrap up in Tampa, Fla. on Aug 26.