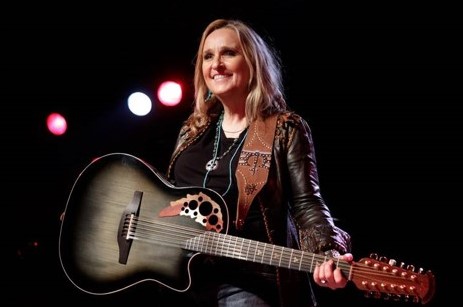 I still remember when I first heard Bring Me Some Water by Melissa Etheridge, which received lots of radio play in Germany when it came out in 1988. Her raspy vocals and the tune’s catchy melody grabbed my attention right away. Then except for occasional songs on the radio, she largely disappeared from my radar screen until 2016 when I came across her killer cover of Sam & Dave’s Hold On, I’m Coming. It was on a great album titled Memphis Rock and Soul, a compilation of classic Stax tunes.

Melissa Etheridge was born on May 29, 1961 in Leavenworth, Kan., which is in the Kansas City metropolitan area. During her teenage years, she started performing in local country bands. Following high school graduation in 1979, Etheridge went to Berklee College of Music in Boston. After three semesters, she decided to call it quits and moved to Los Angeles to start a career in music. Eventually, she was discovered by Chris Blackwell, the head of Island Records where in May 1988 her eponymous debut album appeared.

The record did pretty well, climbing to no. 22 on the Billboard 200. The lead single, the above noted Bring Me Some Water, peaked at no. 10 on Billboard’s Mainstream Rock chart, but surprisingly missed the Hot 100 altogether. Etheridge has since released 14 additional studio albums, the most recent of which, The Medicine Show, came out in April 2019. Her best-selling record became Yes I Am from September 1993, which was certified six times Platinum in the U.S. Her highest charting record on the Billboard 200 was Your Little Secret from November 1995. Let’s get to some music.

Here’s Bring Me Some Water from Etheridge’s eponymous debut. Unless noted otherwise, all tracks in this playlist were written by her. In addition to singing vocals, Etheridge also plays acoustic guitar. It’s just a great tune!

In September 1989, Etheridge released her sophomore album Brave and Crazy. Here’s the You Used to Love to Dance.

I’m the Only One, a nice slow rocker, became Etheridge’s highest charting song on the Billboard Hot 100 where it climbed to no. 8. It topped the Adult Contemporary chart. The tune appeared on the above mentioned Yes I Am, which was her fourth studio album.

In November 1995, the follow-on album Your Little Secret appeared. I Want to Come Over became the second single. Here’s the official video for the tune.

Tuesday Morning is a moving tribute to the victims of 9/11, in particular Mark Bingham, a PR executive who was on United Airlines Flight 93 and one of the four passengers who attempted to retake control of the plane from the hijackers. This resulted in the tragic crash into a field near Shankville, Pa., preventing the plane from hitting its intended target in Washington, D.C. Co-written by Etheridge and Jonathan Taylor, the tune was included on Etheridge’s eighth studio album Lucky from February 2004.

At the 2005 Grammy Awards, Etheridge and Joss Stone performed a great tribute to Janis Joplin. Stone kicked it off with Cry Baby and was joined by Etheridge for a scorching rendition of Piece of My Heart. Etheridge, who appeared bold, had undergone chemotherapy treatment for breast cancer following her diagnosis shortly after the release of the Lucky album. The medley was subsequently made available as a download-only single. Here’s a clip of the Grammy performance. What a triumphant return for Etheridge to the stage!

Let’s do two more. I simply can’t skip the above noted cover of Hold On, I’m Coming. Co-written by Isaac Hayes and David Porter, the tune was first recorded by Sam & Dave and released in March 1966. It became one of their biggest hits that has been covered by countless other artists. Etheridge’s smoking hot rendition has to be one of the best. Check it out!

The last track I’d like to call out is from Etheridge’s most recent album, The Medicine Show, her fifteenth from April 2019. Here’s Faded By Design, which also appeared separately as a single.

I also want to acknowledge the recent news of the tragic death of Etheridge’s 21-year-old son Beckett Cypher from opioid addiction, as reported by CBS News. Etheridge’s former wife Julie Cypher had given birth to Beckett in 1998 after artificial insemination. Later the couple revealed the donor had been David Crosby.

Etheridge has won multiple music awards, including a 2007 Grammy in the category of Best Original Song for I Need to Wake Up, a tune from the 2006 film An Inconvenient Truth. Over the course of her 30-year-plus recording career, she has had five Platinum and two Gold certified albums and six top 40 hits on the Billboard Hot 100. Etheridge has given close to 60 daily live performances on Facebook throughout the COVID-19 pandemic. I think the bio on her website rightly calls her “one of rock music’s great female icons.”