Even though I’ve already done numerous installments for this recurrent feature, many of the 365 dates remain to be explored. Let’s take a look at some of the events on January 23 in rock & roll history.

1956: Cleveland, Ohio banned rock & roll fans under the age of 18 from dancing in public unless accompanied by an adult, after the Ohio police had re-introduced a law dating back to 1931. Music bans rarely work, and there was no way young people could be kept away from rock & roll. Ironically, 27 years later, the very same city saw the founding of the Rock & Roll Hall of Fame. The times they are a-changin’. 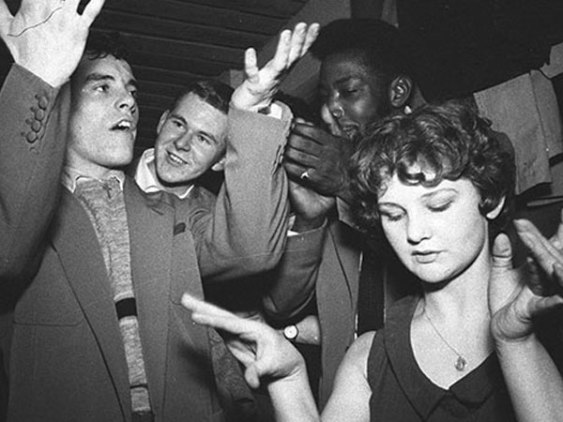 1965: Petula Clark hit no. 1 on the Billboard Hot 100 with Downtown, the first female singer from the U.K. to reach the top of the U.S. chart since Vera Lynn in 1952. The tune, which peaked at no. 2 in the U.K., was written by Tony Hatch, who also produced it for Clark. The song’s recording session on October 16, 1964 at Pye Studios in London was attended by a popular studio guitarist. His name: Jimmy Page. That same year, his session work also included As Tears Go By (Marianne Faithfull), Heart Of Stone (The Rolling Stones) and Baby, Please Don’t Go (Them), among others.

1969: The Beatles were working at Abbey Road Studios as part of the Get Back/Let It Be sessions. They spent a great deal of time on Get Back, recording an impressive 43 takes of the Paul McCartney tune, none of which was officially released. Their efforts eventually would pay off during their rooftop concert. And, yes, they passed the audition!

1971: George Harrison reached no. 1 on the Official Singles Chart in the U.K. with My Sweet Lord, becoming the first former member of The Beatles to top the charts as a solo artist. The tune appeared on All Things Must Pass, Harrison’s first solo album following the band’s breakup. My Sweet Lord peaked at no. 1 in many other countries as well, including the U.S., Canada and Australia. It also made Harrison the first and only ex-Beatle to find himself embroiled in major copyright infringement litigation. The lawsuit alleged My Sweet Lord plagiarized He’s So Fine, a tune Ronnie Mack had written for The Chiffons, giving them a no. 1 single in the U.S. in 1963. In September 1976, a New York judge ruled that Harrison had “subconsciously copied” Mack’s tune. Subsequent litigation over damages dragged on until 1998.

1976: David Bowie released his 10th studio album Station To Station. It became his highest-charting record in the U.S. during the ’70s, climbing to no. 3 on the Billboard 200. The record also catapulted the Thin White Duke into the top 10 in various other countries, including the U.K. (no. 5), Australia (no. 8), The Netherlands (no. 3), Norway (no. 8) and New Zealand (no. 9). In 2012, Rolling Stone ranked Station To Station at no. 324 on their list of 500 Greatest Albums of All Time. Here’s the closer Wild Is The Wind, which like all tracks was written by Bowie.

1978: Terry Kath, best known as a founding member of Chicago, accidentally shot himself dead. Following a party, he started playing around with guns, held a pistol he thought was empty to his temple and pulled the trigger. The freak accident happened only a few days prior to what would have been his 32nd birthday. Referring to Kath, Jimi Hendrix reportedly once told Chicago’s saxophone player Walter Parazaider that “your guitar player is better than me.” Regardless whether Hendrix meant it or not, there’s no question that Kath was an ace guitarist. Here’s I Don’t Want Your Money, which was co-written by him and Robert Lamm, and appeared on Chicago’s third studio album Chicago III from January 1971.

Sources: Wikipedia, This Day in Music.com, The Beatles Bible, YouTube