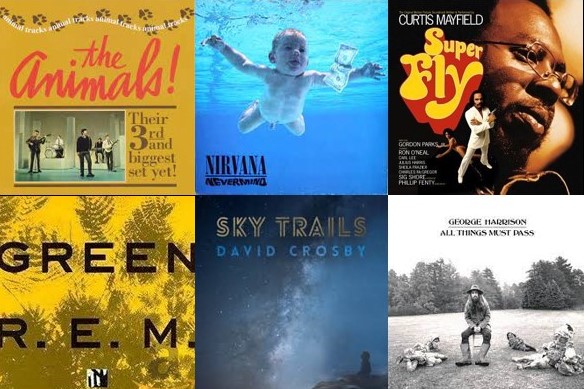 The Animals/We Gotta Get Out of This Place

I’d like to start with the The Animals, one of my favorite ’60s bands that became part of the British Invasion. I’ve always loved their edgy blues rock-oriented sound and frontman Eric Burdon’s distinct deep vocals that perfectly fit their music. Undoubtedly, the group is best known for their rendition of the traditional The House of the Rising Sun. While I love that tune, there are so many other great songs. One of my favorites that is also one of their most popular tracks is We Gotta Get Out of This Place. Co-written by prominent U.S. songwriting duo Barry Mann and his wife Cynthia Weil, the tune initially was intended for The Righteous Brothers. After Mann got a record deal for himself, his label Red Bird Records wanted him to release the song. At the same time, hard-charging record executive Allen Klein had heard the track and handed a demo to Animals producer Mickie Most. The Animals ended up recording it before Mann could – perhaps they should have renamed it “We Gotta Get Out This Song!” We Gotta Get Out of This Place was first released as a single in the UK in July 1965, followed by the U.S. the next month. It also became the opener of the band’s third U.S. album Animal Tracks released in September of the same year.

Let’s jump to the early ’90s next and Nirvana. Co-founded by lead vocalist and guitarist Curt Cobain and bassist Krist Novoselic in Aberdeen, Wash. in 1987, the group was an acquired taste for me. Oftentimes, I still find it hard to digest their loud and dissonant music combined with depressing lyrics. But when I’m in the right mood, there’s just something about Nirvana. Come As You Are is a track from their sophomore album Nevermind from September 1991. The first record to feature drummer Dave Grohl, Nevermind enjoyed a surprising degree of mainstream success and was key in popularizing the Seattle grunge movement and alternative rock. Come As You Are, written by Cobain, also appeared separately as the album’s second single. While it didn’t match the chart success of Smells Like Teen Spirit, it still became one of the group’s most successful songs. It climbed to no. 32 on the Billboard Hot 100 and to no. 27 in Canada, and placed within the top 20 mainstream charts of many European countries.

After that haunting Nirvana tune, I’m ready for something groovy, something funky. Something like Super Fly. Written by the amazing Curtis Mayfield, the tune is the title track of Mayfield’s third solo album that came out in July 1972. It’s also the soundtrack for the Blaxploitation crime drama picture of the same name. Together with What’s Going On by Marvin Gaye, Super Fly is viewed as a pioneering soul concept album featuring then-unique socially aware lyrics about poverty, drug abuse, crime and prostitution. Both albums proved skeptical record executives wrong and became major commercial successes. For Mayfield, Super Fly also was the first of five soundtrack scores he wrote in the ’70s. In August 1990, Mayfield became paralyzed from the neck down when he was hit by stage lightening equipment while being introduced at an outdoor show in Brooklyn, New York. Sadly, that freak accident marked the start of a downward spiral in Mayfield’s health, which culminated in his death from diabetes complications at age of 57 in December 1999.

Warning: Once you listen to the next tune, it might get stuck in your brain. And while with that crazy ongoing heat wave you might feel thirsty, it has nothing to do with the orange flavored soft drink. Orange Crush is a track off R.E.M.’s sixth studio album Green from November 1988. The title refers to Agent Orange, the horrific chemical used by the U.S. during the Vietnam war to defoliate the Vietnamese jungle. Songfacts explains that while R.E.M. lead vocalist Michael Stipe’s lyrics do not refer to a specific war-related experience, his father served in Vietnam as part of the helicopter corps. Like all other tracks on Green, Orange Crush was credited to all members of R.E.M., who apart from Stipe included Peter Buck (guitar, mandolin), Mike Mills (bass, keyboards, accordion, backing vocals) and Bill Berry (drums, percussion, backing vocals). The tune also appeared separately as the album’s lead single in December 1988, becoming R.E.M.’s then-most successful song on the UK Singles Chart where it peaked at no. 28. According to Wikipedia, Orange Crush wasn’t released as a commercial single in the U.S. But it became a promotional single and hit no. 1 on both Billboard’s Mainstream Rock and Modern Rock Tracks charts.

David Crosby/She’s Got to Be Somewhere

Yesterday, David Crosby turned 80 – wow! After all his past struggles with drugs and alcohol and even incarceration, I wonder whether he himself thought he would ever reach this milestone – well, I’m glad he did and wish him many happy returns! Of course, Crosby is best known as a co-founding member of The Byrds and Crosby, Stills & Nash, both groups I dig. In addition to appearing on their albums, Crosby has also had a solo career that started in February 1971 with the release of If I Could Only Remember My Name. But until 2014, his solo output was pretty uneven. The next album after his debut, Oh Yes I Can, came out in January 1989 and was followed by Thousand Roads in May 1993. Since 2014’s Croz, Crosby has been on a late stage career surge that has since seen the release of four additional albums. The most recent one, For Free, dropped just last month. My knowledge of Crosby’s solo work is pretty spotty. One of his albums I’ve listened to previously and reviewed here, is Sky Trails from September 2017. Here’s the opener She’s Got To Be Somewhere. And nope, even though it sounds like Donald Fagen could have written it, the tune was actually penned by James Raymond, Crosby’s son who has worked with his father since 1997, both on the road and in the studio. Crosby is a big Steely Dan fan. Fagen knows and even co-wrote a song for Crosby’s last album, Rodriguez for a Night.

Yes, the time has come again to wrap up yet another Sunday Six installment. All Things Must Pass looks like an appropriate tune for the occasion. Apart from the fitting title, the pick is also inspired by the recent appearance of the massive 50th anniversary reissue of George Harrison’s third solo album from November 1970 and his first after the breakup of The Beatles. Frankly, I’ve yet to listen to it. The super deluxe format, which my streaming music provider offers, has 70 tracks. In addition to remixed songs of the original 3-LP album, it features numerous outtakes, jams and demos – altogether close to 4.5 hours of music! Anyway, let’s turn to the title track. I did not know that it was Billy Preston who first released the song as All Things (Must) Pass on his album Encouraging Words that appeared two months prior to Harrison’s record – nice version that’s here in case you’re curious! Also unbeknownst to be Preston included a great rendition of My Sweet Lord as well.