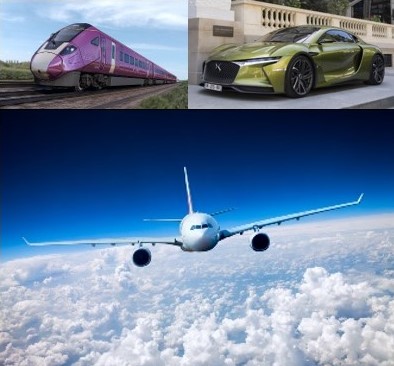 Here’s part II of a mini series of three posts featuring songs related to planes, trains and automobiles. Each installment includes five tunes in chronological order from oldest to newest. Part I focused on planes. Now it’s on to trains. Hop on board!

In case you didn’t read the previous installment, the idea of the mini series came from the 1987 American comedy picture Planes, Trains and Automobiles. The film is about a marketing executive (Steve Martin) and a sweet but annoying traveling sales guy (John Candy) ending up together as they are trying to get from New York home to Chicago for Thanksgiving. Their plane’s diversion to Wichita due to bad weather in Chicago starts a three-day odyssey and one misadventure after the other, while the two, seemingly incompatible men use different modes of transportation to get to their destination.

Let’s kick of this installment with Mystery Train, written and first recorded by Junior Parker as a rhythm and blues track in 1953. When Elvis Presley decided to cover the song, it was turned into a rockabilly tune featuring him on vocals and rhythm guitar, together with his great trio partners Scotty Moore (guitar) and Bill Black (bass). Produced by Sam Philips at Sun Studios in Memphis, Tenn., Presley’s version was first released in August 1955 as the B-side to I Forgot to Remember to Forget, which became his first charting hit in the U.S., hitting no. 1 on the Billboard Hot Country Songs. This has got to be one of the best rockabilly tunes ever!

The Monkees/Last Train to Clarksville

Last Train to Clarksville is the debut single by The Monkees, which was released in August 1966. While at that time they still were a fake band that didn’t play the instruments on their recordings, which as a musician is something that generally makes me cringe, I just totally love this song. It was co-written by the songwriting duo of Tommy Boyce and Bobby Hart, who used their band Candy Store Prophets to record the tune’s instrumental parts. At least there was one member from The Monkees on the recording: Micky Dolenz, who would become the band’s drummer for real, performed the lead vocals. Last Train to Clarksville, a Vietnam War protest song disguised by ambiguous lyrics and a catchy pop rock tune inspired by The Beatles’ Paperback Writer, was also included on The Monkees’ eponymous debut album from October 1966.

Long Train Runnin’ has been one of my favorite tunes by The Doobie Brothers since I heard it for the first time many moons ago. As such, it was a must to include in this post. Written by Tom Johnston, the groovy rocker is from the band’s third studio album The Captain and Me that appeared in March 1973. The song was also released separately later that month as the album’s lead single, backed by Without You. Long Train Runnin’ became the first U.S. top 10 hit for the Doobies on the Billboard Hot 100, climbing to no. 8, as it did in Canada. In the U.K., it reached no. 7, marking their highest charting single there.

I had not known about this tune by The Allman Brothers Band and wouldn’t have found it without a Google search. All Night Train, co-written by Gregg Allman, Warren Haynes and Chuck Leavell, is included on the band’s 11th studio album Where It All Begins, their second-to-last studio release that appeared in May 1994. The track features some nice guitar action by Haynes and Dickey Betts and, of course, the one and only Gregg Allman on lead vocals and keys. Great late-career tune!

For the final track let’s kick it up. How much? How about kick-ass rock & roll level with AC/DC! Rock ‘n’ Roll Train is the opener to their October 2008 studio release Black Ice. By then, the time periods in-between AC/DC albums had significantly lengthened, especially compared to the ’70s and ’80s. Predecessor Stiff Upper Lip had come out in February 2000. The next release, Rock or Bust, would be another six years away. Obviously, AC/DC has had their share of dramatic setbacks, but last November’s Power Up album proved one shouldn’t count them out yet. There has been some chatter about touring, though I haven’t seen any official announcements. Earlier this month, Brian Johnson joined Foo Fighters at a Global Citizen Vax Live concert in Los Angeles to perform Back in Black. Of course, one song is different from an entire concert, not to speak of an entire tour. Still, I guess it gives AC/DC fans some hope that maybe they’ll get another chance to see the band. Meanwhile, let’s hop on the rock ‘n’ roll train!