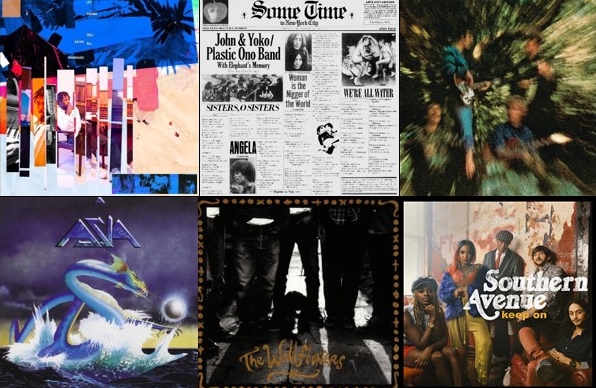 Another Sunday morning is upon us, at least in my neck of the woods (Central New Jersey, USA). Of course, this means it’s time to embark on another journey to celebrate music of the past six decades, six tunes at a time.

Julius Rodriguez/Gift of the Moon

This trip starts in the present. The immediate present. Julius Rodriguez, aka Orange Julius, is an American pianist, drummer and composer, whose music combines elements of jazz, avant-garde, R&B, hip-hop and pop. He started studying classical piano at a young age, or I should say at an even younger age – he’s only 23 years old! His father, a jazz connoisseur, introduced him to artists like Thelonious Monk, Duke Ellington, Louis Armstrong and John Coltrane. Rodriguez has been an active touring member of New York jazz combo Onyx Collective, and has worked as a sideman with numerous other artists like Macy Gray, Wynton Marsalis and Nick Hakim. And, yes, in addition to all of that, Rodriguez has been releasing music under his own name and the Orange Julius moniker since 2015. Here’s Gift of the Moon, off his new album Let Sound Tell All, which appeared on June 10.

Now let’s kick it up with some great rock & roll. One artist I’ve always loved in this context is John Lennon. I recall reading somewhere that John said the rock & roll covers The Beatles played at the Star-Club in Hamburg and the Cavern in Liverpool before they were famous were the best music they ever performed. Of course, John said many things about The Beatles after they had broken up, which seemed to dismiss their original music. While I don’t agree with some of his remarks, I think he’s right The Beatles were a great rock & roll band. John was a great rock & roll singer, which he not only demonstrated on his 1975 covers album Rock ‘n’ Roll but also on this tune: New York City, a track that appeared in June 1972 on a double LP titled Some Time in New York City, released as John & Yoko/Plastic Ono Band with Elephant’s Memory – rolls right of your tongue! Go, Johnny, go – que pasa New York!

Creedence Clearwater Revival/Born On the Bayou

I don’t know about you, I’m in the mood for more rock. Let’s go to 1969 and the swamp. I trust Creedence Clearwater Revival, aka CCR, don’t need an introduction. If you’d like a crash course, check this AllMusic bio. Like most CCR tunes, Born On the Bayou was penned by the group’s leader John Fogerty. Yes, the man had pretty strong opinions, which he oftentimes imposed on his bandmates. And, yes, I feel sometimes they don’t get the credit they deserve. But there’s no doubt John knew what he was doing. Born On the Bayou is the lead track of CCR’s sophomore album Bayou Country, which appeared in January 1969. It also was released separately as the B-side to the record’s single Proud Mary. In my humble opinion, Born On the Bayou should have been a separate single, and it should have been an A-side – man, I love this tune!

And next, we find ourselves back in ’82. When I caught Heat of the Moment by Asia on the radio the other day, it reminded me of what a catchy tune it is. Growing up in the ’80s back in Germany, I loved much of the music that came out during that decade. I suppose you could say, well, it was in the heat of the moment! While I can’t deny a certain remaining weak spot, nowadays I’m no longer as fond of ’80s music. That being said, some songs are holding up pretty well to me. One is Asia’s debut single, co-written by the band’s John Wetton (lead vocals, bass) and Geoff Downes (keyboards, vocals), which appeared on their eponymous debut album, released in March 1982. After they broke up in 1986, Asia reunited in 1989 and remain active to this day, with Downes as the only original member.

The Wallflowers/Shy of the Moon

Undoubtedly, being a music artist and offspring of Bob Dylan poses challenges. But I feel Jakob Dylan, a son of Bob and his first wife Sara Dylan (born Shirley Marlin Noznisky), has done pretty well. While Jakob played guitar in various high school bands and was featured as a guitar player on his friends’ group’s eponymous 1987 album, Trash Matinee, he didn’t start focusing on a professional music career until 1989. Together with his childhood friend Tobi Miller (lead guitar) he began forming a band called The Apples. After Barrie Maguire (bass), Peter Yanowitz (drums) and Rami Yafee (keyboards) had joined the group, they changed their name to The Wallflowers and released their eponymous debut album in August 1992. The Wallflowers are still around, though it’s now a music project by Dylan with a revolving cast of touring musicians. Here’s Shy of the Moon, the great openers of The Wallflowers’ above-noted eponymous debut album. Like all except one of the remaining tracks on the album, the tune was penned by Dylan.

And once again another music trip has arrived at its final stop. If you’re a more frequent visitor of the blog, you probably recall Southern Avenue are one of my favorite contemporary bands. They are also among the nicest, down-to-earth professional musicians I’ve met. The group from Memphis, Tenn., which has been around since 2015, blends blues and soul with flavors of contemporary R&B. I also love the racial diversity they represent. Southern Avenue are Israeli blues guitarist Ori Naftaly; two amazing African American ladies, lead vocalist Tierinii Jackson and her sister Tikyra Jackson who plays the drums and sings backing vocals; white bassist Evan Sarver; and African American keyboarder Jeremy Powell. Tellingly, in 2016 they became the first new act signed to Stax Records in many years. Here’s the great title track of their sophomore album Keep On, released in May 2019.

This post wouldn’t be complete without a Spotify playlist of the above tunes. Hope there’s something you enjoy!