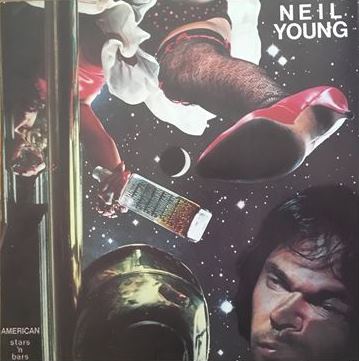 Why American Stars ‘N Bars? And why now? To start with, it includes Like A Hurricane, one of my all-time favorite Neil Young rock tunes – well, make that ’70s rock songs! And second, because of that, I grabbed the record yesterday on vinyl in a great small store close to my house, which buys and sells used vinyl records and vintage stereo equipment, a place in which I could get lost, but that’s another story! Since other than Like A Hurricane I didn’t know any of the other tracks, yes, it was at least in part an impulse purchase!

When spinning the record for the first time, I noticed two things. I was reminded how short vinyl records used to be. Side one clocks in at less than 18 minutes. With just over 20 minutes, side two isn’t much longer. The second thing I realized is that most of the songs on the album are country and folk-oriented – of course, Young has always done acoustic music, and I consider many of these tunes to be among his best work. Still, I guess because of Like A Hurricane, I expected more such rockers. 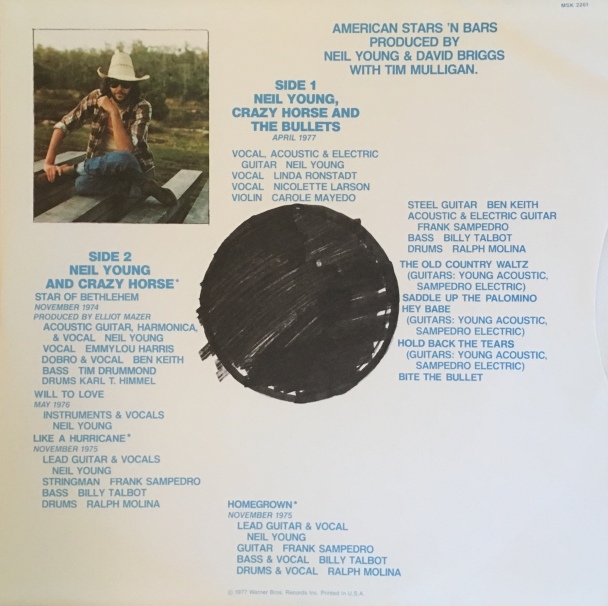 Looking for background and some inspiration, I started reading up on American Stars ‘N Bars, Young’s eighth studio album, which was released in May 1977. Most reviews characterized the record as a hodgepodge and highlighted Like A Hurricane as the standout. One exception was a take by the Observer, which revisited the record in late May this year on the occasion of its 40th anniversary, calling it “in many ways…the quintessential Neil Young album.” I think they made a good point.

Throughout his career, Young has been known for making impulsive decisions. This has not always exactly endeared him to others. As an Ultimate Classic Rock story notes, in the mid-’70s, he recorded various albums that were ready to release but at the last minute changed his mind. For example, Young aborted Homegrown and instead decided to pursue and release Tonight’s The Night. American Stars ‘N And Bars is another example of Young’s unpredictability. Instead of this record, the retrospective collection Decade had been slated for release. Unlike Homegrown, which never appeared, Decade was delayed and came out in October 1977, five months after American Stars ‘N Bars.

The notion that American Stars ‘N Bars is a hodgepodge is not entirely unfounded. In fact, Young himself was very transparent about it by indicating the dates of the four different recording sessions on the album’s sleeve: November 1974, November 1975, May 1976 and April 1977. Side one lists Young, his long-time band Crazy Horse and The Bullets as the performers. The latter was a spontaneous name and included pedal steel guitarist Ben Keith, violinist Carole Mayedo, as well as vocalists Linda Ronstadt and Nicolette Larson. Side two indicates Young and Crazy Horse as the performing artists. All tracks were written by Young, except Saddle Up The Palomino, which he co-wrote with bassist Tim Drummond and singer-songwriter Bob Charles. 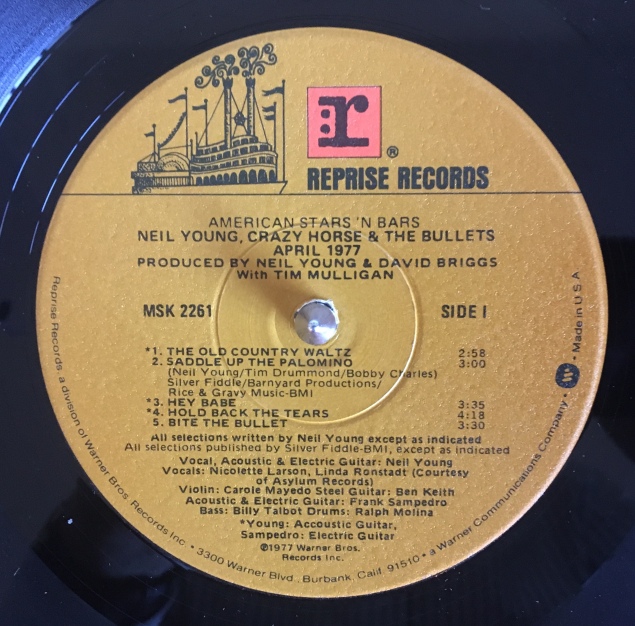 All tracks on side 1 were recorded in April 1977. The opener The Old Country Waltz is a traditional country tune that features fiddle and pedal steel guitar, along with Ronstadt and Larson on backing vocals. The lyrics describe how Young received the news that his first wife actress Carrie Snodgress was leaving him. The topics of love, loss and lust also prominently feature on other tracks.

This is followed by a more upbeat sounding Saddle Up The Palomino. According to the above Observer story, Carmelina, the woman mentioned in the song, supposedly was the wife of his neighbor. The tune features more pedal steel guitar, fiddle and backing vocals by Ronstadt and Larson. Apparently, the giggle at the beginning of the song is from Larson, who would later become Young’s next girlfriend. 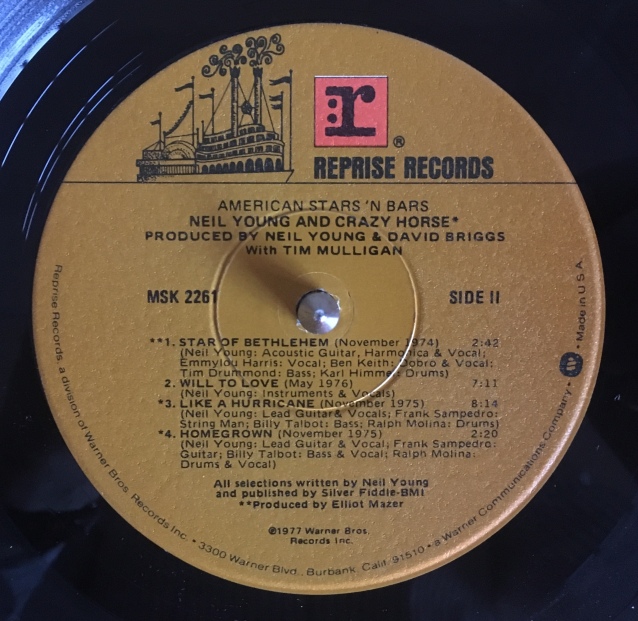 Side 2 kicks off with Star Of Bethlehem, which was recorded in November 1974 and initially had been slated for Young’s never released Homegrown album. It’s a typical Young acoustic track, which could have appeared on an album like Harvest. The song prominently features him on acoustic guitar and harmonica. Country artist Emmylou Harris provides beautiful harmony vocals.

While I like the album’s acoustic tunes, the clear crown jewel to me remains Like A Hurricane. Frankly, if it hadn’t been for this epic tune, I wouldn’t have bought the record. Recorded in November 1975, Young initially had in mind to put this track on Chrome Dreams, yet another unreleased album. Referring to Young’s biography Shakey by Jimmy McDonough, Songfacts explains that while recovering from vocal cord surgery and unable to talk, Young went to a bar with some friends. One of them, Taylor Phelps, said: “Neil, Jim Russell, David Cline and I went to Venturi’s in La Honda. We were really f–ked up. Neil had this amazing intense attraction to this particular woman named Gail – it didn’t happen, he didn’t go home with her. We go back to the ranch and Neil started playing. Young was completely possessed, pacing around the room, hunched over a Stringman keyboard pounding out the song.”

The last track I’d like to call out is the record’s closer Homegrown. Originally, it was supposed to become the title track to Young’s above abandoned album. While not as hard-charging as Like A Hurricane, the tune still has a rock feel to it thanks to Young’s distorted electric guitar. Perhaps not surprisingly, it was recorded at the same time as Like A Hurricane.

American Stars N’ Bars reached no. 21 on the U.S. Billboard 200, and was certified Gold in October 1977 by the Recording Industry Association of America. Undoubtedly, the album’s performance was largely fueled by Like A Hurricane. The track was also released separately as a single and became one of Young’s best-known songs and a staple of his live shows. In a 2011 Rolling Stone readers poll, it was ranked no. 4 among the top 10 Young songs.