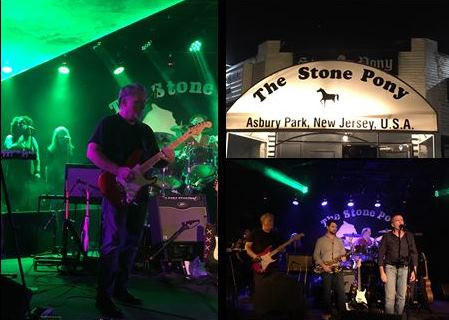 My Pink Floyd journey started in circa 1976 when I first listened to Wish You Were Here, yet another gem in my older sister’s vinyl record collection at the time. Whether she did so consciously or not, once again I realize I owe her a debt of gratitude for introducing me to various great artists I continue to dig to this day, more than 40 years later.

When it comes to Pink Floyd, I suppose the closest original live experience you can get these days is Roger Waters whose Us + Them tour is set to hit South America and Mexico in October. We may also be able to look forward to more gigs from David Gilmour but the outlook is still unclear. When discussing his Live At Pompeii album in September 2017, he said he’d be very uncomfortable to do another tour without new material, adding he has several new songs close to completion.

I don’t know about you, but I can’t just hop on a plane to catch Waters in South America; and frankly even if I could, I’m not even sure I would want to. The prospect of being able to see Gilmour look uncertain at this time. So what’s a Floyd fan like me to do? Enter  Echoes, “The American Pink Floyd.” It’s obvious this tribute band from Delaware doesn’t aim to look like Roger Waters, David Gilmour, Richard Wright and Nick Mason but instead is all about capturing the great music. And that they do incredibly well!

I saw Echoes first a year ago at Rock The Farm, where they closed out the great annual tribute band spectacle in Seaside Heights, N.J., with an amazing performance under the stars. When I learned a few weeks ago they would come to Asbury Park, N.J. to play The Stone Pony, I didn’t think twice whether or not I should get a ticket. The show happened last night, and it truly was experiencing the great gig in the sky coming down to earth and back to the dark side of the moon. But, to also creatively borrow from Aerosmith and Joe Perry and Steven Tyler, why don’t I let some of the music do the talking?

Here is the opener of the first set, Sheep. Written by Waters, the tune appeared on Floyd’s tenth studio album Animals, released in January 1977.

In 1975, Pink Floyd recorded the above mentioned Wish You Here, their ninth studio album. Initially, this was my favorite Floyd record. Here is Echoes’ rendition of Have A Cigar, Waters’ cynical take on the recording industry. And, yes, the band was just fantastic, and that’s really what think, even though they didn’t have Pink. Clever, huh?

Another track I’d like to highlight from the first set is Hey You. Gilmour and Waters co-wrote the tune for The Wall, Floyd’s 11th studio album from November 1979 – by the way, the only album I bought on vinyl at the time it came out. This was during my high school rebel days when the message Hey teacher, leave them kids alone resonated, at least when it came to some of my teachers who shall remain unnamed!

Next up is the closer of the first set and undoubtedly the highlight of the show: Time and The Great Gig In The Sky. Both gems are included on Floyd’s studio release that preceded Wish You Were Here: The Dark Side Of The Moon, from March 1973. Time was co-written by all four members of Pink Floyd, while The Great Gig In The Sky was credited to Wright and the amazing vocalist Clare Torry. If you don’t want to watch the entire clip, at least do yourself a favor and check out Echoes’ (backing) vocalist Michelle Sumler Hover, who is just absolutely killing it on Gig.

Set 2 brought more amazing music and in addition to the above albums also included material from Meddle, Floyd’s sixth studio album released in October 1971. But first here’s the epic Money and Us And Them from Dark Side, tunes that were respectively written by Waters and co-written by him and Gilmour. Check out the great work from the band’s sax player Andrew Bedell.

Another track I’d like to highlight from the second set is Run Like Hell, a co-write by Waters and Gilmour from The Wall album.

I guess no Pink Floyd tribute show would be complete without Wish You Were Here. And since Echoes apparently wanted to end their gig with a big bang, they combined it with One Of These Days. The title track of Floyd’s ninth studio album from September 1975 was penned by Waters and Gilmour, while One Of These Days, off the Meddle album, was credited to all band members.

After the show, I briefly had a chance to say ‘hello’ to Bill Swezey, who looked like a happy camper. I think he certainly had plenty of good reason after a great gig! He said they want to keep Floyd’s music alive. When I asked him how long they had been doing this, he noted the band has been together since 2015. He also confirmed what was obvious to me that all of the band’s members have been professional musicians for many years.

According to their Facebook page, Echoes are scheduled to play next on October 19th at Ardmore Music Hall in Ardmore, Pa. The band’s website also lists another show for December 22nd at Queen Theater in Wilmington, Del. If you dig Pink Floyd and can get to any of these places, I would highly recommend Echoes.