Despite several hits in the late 60s and early 70s, Carter didn’t achieve the popularity of other FAME recording artists 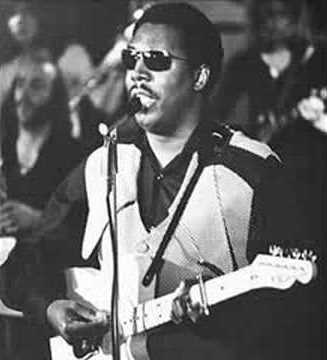 I just love when this happens. Yesterday morning, I checked Apple Music and under “new releases” spotted Snatching It Back by Clarence Carter, a name I wasn’t familiar with. The cover showing Carter holding his electric guitar somehow reminded me of Stax, so I decided to give the album a listen. Right from the get-go I was intrigued by what I heard – great southern style soul and R&B that makes you groove and snip your fingers – my kind of music to start the day!

Carter was born blind in Montgomery, Ala. on January 14, 1936. According to his profile on Apple Music, he taught himself how to play the guitar at a young age by listening to blues artists like John Lee Hooker, Lightnin’ Hopkins and Jimmy Reed. Any guy who can pull that off has my full respect! Following graduation from Alabama State College with a B.S. in music in August 1960, another remarkable accomplishment, given the time and place, he formed the duo Clarence & Calvin with his friend Calvin Scott. They signed with the Fairlane label and started releasing a series of singles, none of which got any traction. After Scott was badly injured in a car accident, Carter went on as a solo artist.

It took until 1967 that Carter’s music received first recognition with Tell Daddy, recorded at the legendary FAME Studios in Muscle Shoals, Ala. The tune, which he co-wrote, peaked at no. 35 on the Billboard R&B Chart. Carter gained additional visibility when Etta James covered the song as Tell Mama, scoring a no. 10 on the R&B Chart and peaking at no. 23 on the Billboard Hot 100, her highest-charting song there. At the end of 1967, he joined Atlantic Records and put out a series of records and singles. Some were pretty awesome and did well on the charts, but Carter never achieved the popularity of a Wilson Pickett, Otis Redding or Solomon Burke.

At the end of 1971, after a string of less successful releases, Carter left Atlantic and went to FAME Records, which like FAME Studios was owned by Rick Hall. In 1975, he signed with ABC Records, but the advent of disco negatively impacted his career. In 1985, Carter switched to Ichiban Records and released six albums before establishing his own Cee Cee Entertainment label in 1996. Since then, he has released at least 14 additional records, including the above mentioned Snatching It Back, a compilation that appeared last Friday. Time for some music. I’m mostly focusing on Carter’s early career.

I’d like to kick things off with the above mentioned Tell Daddy, Carter’s first hit single. According to Wikipedia, he co-wrote the song with Marcus Daniel and Wilbur Terrell, though for some reason these guys didn’t receive any credits. BTW, Etta James initially resisted to record her version of the tune Tell Mama, but apparently Rick Hall insisted and eventually she gave in – a decision I imagine she didn’t regret!

Slip Away, released in 1968, was Carter’s first big hit, peaking at no. 2 on the Billboard R&B Chart. Co-written by Marcus Daniel, Wilbur Terrell and William Armstrong, it was included on his Atlantic debut studio album This Is Clarence Carter.

Also in 1968, Carter released a single called Back Door Santa, which hip hop group Run-D.M.C. sampled for their 1987 hit Christmas In Hollis. The tune was also included on his second Atlantic release Testifyin’ from 1969. The song is credited to Carter, Rick Hall, David Newman and Marcus Daniel. While the tune was also featured on a Christmas album, the sexually suggestive lyrics make it clear it doesn’t have much to do with the holiday. Steamy lyrics, BTW, became Carter’s trademark.

Snatching It Back, also from Testfyin’, was another successful single for Carter released in 1969. The song was co-written by Carter, Jimmie Haskell, Rick Hall, Harrison Calloway and George Jackson. I just love the horns on this tune and its Stax vibe.

Another beautiful Carter song and yet another track from Testifyin’ that came out in 1969 is The Feeling Is Right. It was composed by Jimmie Haskell, Rick Hall, Harrison Calloway, Mickey Buckins and George Jackson.

Patches, the title track of Carter’s 1970 studio album, became his biggest hit, climbing to no. 2 on the Billboard R&B Chart and reaching no. 4 Billboard Hot 100. Written by General Johnson and Ron Dunbar, the tune also earned Carter the 1971 Grammy Award for Best Rhythm & Blues Song.

Another nice track from the Patches album is You’re Love Lifted Me, co-written by Jimmie Haskell, Harrison Calloway and Obie McClinton. And yes, while the title looks grammatically wrong, it actually seems to be written that way – don’t know why.

I’m The Midnight Special is the opener to Carter’s 1973 album Sixty Minutes With Clarence Carter, the first record after he had signed on with FAME. It is credited to Muscle Shoals Horns, Raymond Moore, George Jackson, Allyn Mitchell and Larry Chambers.

In 1975, Carter issued a single called I Got Caught. Co-written by him and R. Hatcher, the soul ballad is classic Carter, lyrically speaking. Apparently, it was one of his last singles that charted.

The last tune I’d like to highlight is a Carter composition called Strokin’, the closer of his 1986 studio album Dr. C.C.  Since due to its lyrics the song was considered too raunchy for release as a single or radio play, the record company placed it in jukeboxes where it apparently became popular. Use in an Eddie Murphy picture gave it further exposure.

Today at the mighty age of 82, Carter is still active. While it appears he currently has no official website with a tour schedule, I found a reference on the web, according to which he’s scheduled to perform at Union Bank & Trust Pavillion in Portsmouth, Va. on September 8, 2018.