For more than 40 years, BAP has been one of the most successful rock bands in Germany 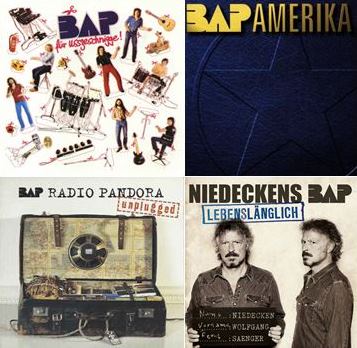 While in the U.S. and other countries Rammstein, Scorpions and Kraftwerk may be the best known German bands, Germany has much more to offer. A great example is BAP, a band that has been popular there for 40-plus years but isn’t known much beyond Germany and some of its immediate neighbor countries. They also happen to be one of my long-time favorite German rock bands. BTW, I also like the Scorpions. Since unlike the English-singing German hard rockers BAP performs most of their songs in a German dialect, I’m under no illusion that winning over non-German speaking readers is likely going to be a long shot at best. Nevertheless, I decided to put together this post and playlist, if only to prove that German contemporary music is more than heavy rock and electronic music.

The origins of BAP go back to 1976, when singer-songwriter Wolfgang Niedecken formed an acoustic trio with guitarist Hans Heres and percussionist Afro Bauermann, and they started playing in the West German city of Cologne. Prior to that, Niedecken already had gained some local prominence as a solo artist performing Bob Dylan songs and as a painter. Dylan is one of his key music influences, along with Bruce Springsteen, The Kinks and The Rolling Stones. In fact, Niedecken is friends with the Boss who occasionally has invited him on stage to play a song during Springsteen gigs in Germany.

In November 1979, the band that by then had grown to a six-piece recorded their debut studio album Wolfgang Niedecken’s BAP rockt andere kölsche Leeder. In English this means something like “Wolfgang Niedecken’s BAP rocks other Kölsch songs.” The remainder of this post includes rough translations of song and album titles in parentheses. Kölsch is a German dialect spoken in the city of Cologne and surrounding areas. To this day, most BAP songs are performed in that dialect, with band leader and lead vocalist Niedecken remaining as the only original member. As somebody who grew up not far from Cologne, I can’t deny this dialect sounds charming to me and has a certain sentimental value.

Starting with their third studio album für usszeschnigge! (to cut out) from 1981, the band shortened their name from Wolfgang Niedecken’s BAP to just BAP. “Bap,” which is derived from the word “papa” (as in Madonna’s Papa Don’t Preach) was the nickname for Niedecken, who used to call his father that way. The band, which went through various line-up changes over the decades, kept the name BAP until two long-time members Jürgen Zöller (drums) and Helmut Krumminga (lead guitar) left in September 2014. Following their departure, out what appears to be some frustration over yet another line-up change, Niedecken announced that going forward the band would perform under the name Niedeckens BAP and no longer have a standing line-up.

To date BAP have released 17 studio albums, seven live records and three compilations. With more than 5.9 million records sold and eleven no. 1 and 19 top 10 albums, BAP is one of the most successful German language rock bands. After their breakthrough album für usszeschnigge! from October 1981, BAP started touring throughout Germany. Eventually, they expanded to other European countries, including Austria, Switzerland, Belgium, Netherlands, Denmark and Luxembourg. In October 1987, they even went to China, playing eight dates there. Niedecken who is politically active has also performed in Nicaragua and Mozambique. Yet BAP haven’t gained a footprint beyond the above European countries, which is likely due to the language barrier. Time for some music!

The first tune I’d like to highlight is Helfe Kann Dir Keiner (nobody can help you) from BAP’s second studio album Affjetaut (defrosted). Niedecken writes all of BAP’s lyrics. Sometimes, he has taken songs written by others, such as Dylan’s Like A Rolling Stone or Death Of A Clown by The Kink’s Dave Davies and his brother Ray Davies, and translated/adapted them to Kölsch. The music is often written or co-written by other band members, in this case guitarist Klaus Heuser, who frequently assumed that role during his 19-year tenure with BAP.

Verdamp Lang Her (it’s been a long time) is one of BAP’s best known songs and remains a crowd pleaser during live shows to this day. Another Heuser/Niedecken co-write, the tune was first recorded by the band for their above mentioned studio release für usszeschnigge! The opening chord progression is the same as for Knockin’ On Heaven’s Door. Given Dylan’s influence on Niedecken, this may not be a coincidence, though I don’t know.

Next up: Alexandra, Nit Nur Do (Alexandra, you’re not the only one). Credited to Niedecken (lyrics) and BAP (music), the tune appeared on the band’s fifth studio album Zwesche Salzjebäck un Bier (between salt pretzels and beer), which appeared in May 1983.

In August 1989, BAP released their seventh studio record Da Capo. It was the first with Jürgen Zöller who replaced Pete King on drums, following his untimely death from cancer in 1987. Here is the great opener Stadt Im Niemandsland (city in no man’s land), which was co-written by Niedecken and Heuser. Check out the nice double lead guitar lines, which are bit reminiscent of Boston.

Amerika (America), another Niedecken/Heuser co-write, is the title track of BAP’s 10th studio release from August 1996. The song describes the impressions of a child witnessing the liberation of Nazi Germany by the Americans after the end of World War II. To give you a flavor, here’s a translated excerpt: So that’s how they look/check it out, there’s also a black guy among them/Look at the fellow on the tank, he’s eighteen at the most, and he liberated us/They warned us about them/Why did we believe all this crap?/These guys have been through so much/walking through mines from the [English] Channel all the way to here/It’s now nighttime where they are coming from/They are still sleeping there across the ocean/They have buildings higher than the dome [of Cologne]/ There’s jazz on the radio all day long…

The follow-on album to Amerika was Comics & Pin-Ups from January 1990. Here is the official video of Lena, a song co-written by Jens Streifling (horns, guitar) and Niedecken.

By the time BAP released their 13th studio album Aff Un Zo (every now and then) in June 2001, long-time members Klaus Heuser (guitar) and Alexander Büchel (keyboards) had left and been replaced by Helmut Krumminga and Michael Nass, respectively. Especially the departure of Heuser, who had been instrumental in writing the music for many of the band’s best known songs, marked the end of an era. But his successor, who like Heuser is a talented guitarist, quickly established himself and helped shape BAP’s sound for the next 15 years. In case you didn’t think Germans could play reggae, here’s the record’s title track.

In May 2008, Radio Pandora appeared. BAP’s 16th studio album was a major release featuring a plugged and an unplugged version. Eight of the 14 tracks on each record were different versions of the same songs, while the remaining six tunes were entirely different. Here’s a cool blues rocker from the plugged edition called Diego Paz Wohr Nüngzehn (Diego Paz was nineteen). It would make a good ZZ Top tune!

Another title track I’d like to highlight is Halv Su Wild (not a big deal). Co-written by Krumminga and Niedecken, the song appeared on BAP’s 17th studio album, the last featuring the guitarist and the band’s long-time ace drummer Jürgen Zöller. Here’s a nice live clip of the catchy rock song.

The last tune I want to highlight is from the band’s most recent 18th studio album  Lebenslänglich, (sentenced to life), which came out in January 2016. Released as Niedeckens BAP, the record features Ulrich Rode as replacement for Krumminga.  Sönke Reich took over on drums for Zöller. As noted on BAP’s official website, the 35-year-old from the Northern German city of Hamburg is the only member who is younger than the band. Here’s a live clip of Dä Herrjott Meint Et Joot Met Mir (god has been good to me).

In March 2016, during a short trip to Germany, I had a chance to catch BAP in the Bavarian town of Neu-Ulm during their 40th anniversary tour. With the departure of Krumminga and Zöller, I wasn’t quite sure what to expect, but it turned out to be a great show. BAP continues to rock on. Niedecken, who turned 67 in March, had a stroke in November 2011 from which he fully recovered. In addition to him, Rode and Reich, the band’s current line-up includes Werner Kopal (bass), Anne De Wolff (multi-instrumentalist) and Michael Nass (keyboards). The band is currently on a 2018 tour, which is mostly focused on Germany.

8 thoughts on “My Playlist: BAP”