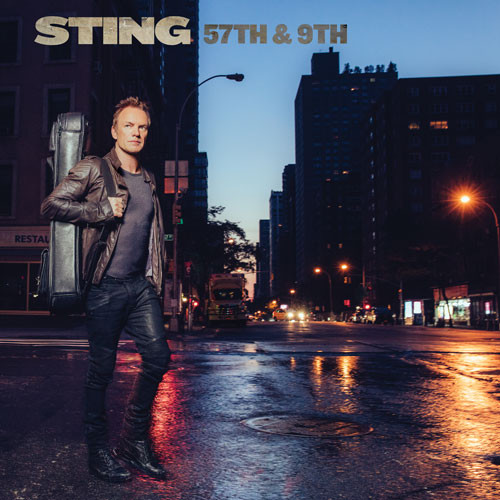 After the rapid sinking of his musical The Last Ship and two albums with traditional English renaissance and Christmas songs, many people including myself were wondering whether the “old” Sting would ever return. Well, he just did! And to me it very much feels like 1991 again when Sting released The Soul Cages, his third studio album.

I had a pretty good feeling about 57th & 9th from the get-go when I listened for the first time to I Can’t Stop Thinking About You, the album’s first single released on September 1st. It proves Sting still has a great ear for catchy pop rock tunes. Not surprisingly, the song made it all the way to No. 3 on Billboard’s Adult Alternative Songs chart. I also immediately liked Petrol Head, the third single that came out earlier this month, an upbeat rocker with a refreshing dose of rawness to it.

Another standout on the album is 50,000, a eulogy for rock stars. According to an interview Sting gave to Rolling Stone in July, he wrote the song during the week of Prince’s death.Undoubtedly, 2016 has been a rough year in music, which in addition to Prince saw David Bowie, Glenn Frey and Keith Emerson pass away, among many others. Two other tunes I like to call out are Down, Down, Down and One Fine Day. Both could have appeared on Soul Cages, one of my favorite Sting albums.

57th & 9th was produced by Martin Kierszenbaum, who has produced for Lady Gaga and Madonna, among others. Kierszenbaum also plays organ, piano, mellotron and keyboards on the album. The title is named after the intersection in New York City  Sting crossed every day on his way to the studio where much of the music was recorded.

Sting co-wrote the majority of songs with Dominic Miller, Lyle Workman and Josh Freese. Miller, a British guitarist, has worked with Sting for more than 20 years. Workman is an American session musician and producer, who played with Sting during his 2006 Broken Music tour and at Live 8. Freese is an American multi-instrumentalist who among others played drums for Guns N’ Roses from 1997 to 2000.

I’ve always admired Sting, both for his musical craftsmanship and his songwriting. I also have a lot of respect for artists who step away from their formula that brought them success to explore something new. Sting has certainly done that and probably gained some inspiration from it. Maybe that’s what it took to come back and make another great pop rock album.

2 thoughts on “Sting Comes Roaring Back”