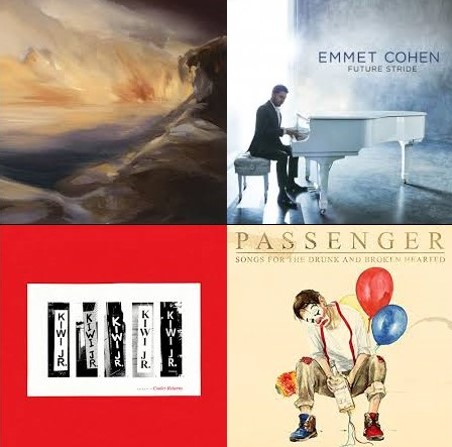 It’s hard to believe another week just flew by. This year is already starting to feel old. The good news is another end of the week means more new music. This latest Best of What’s New installment is pretty eclectic, featuring psychedelic space rock, piano jazz, indie rock and folk-oriented pop. Let’s get to it.

The Besnard Lakes are a space and psychedelic rock band from Canada, which was formed in 2003. According to an artist profile on Apple Music, the Montreal band became known for long, intricately textured songs and even longer album titles…Marital and musical partners Jace Lasek (vocals, guitar) and Olga Goreas (vocals, bass)…formed the Besnard Lakes in 2001 as a sideline to Lasek’s day job as an in-demand producer at the Montreal recording studio he and Goreas own, Breakglass Studios. In addition to them, the band’s current line-up includes Robbie MacArthur (guitar), Richard White (guitar), Sheenah Ko (keyboards) and Kevin Laing (drums). Apart from having released six studio albums, three EPs and various singles to date, the band has also written two film scores. Blackstrap, co-written by Lasek and Goreas, is the opener of their new album The Besnard Lakes Are the Last of the Great Thunderstorm Warnings, released yesterday (January 29) – no kidding above about long album titles! And, yes, it’s definitely spacey!

Emmet Cohen is a jazz pianist and composer from New York City. According to his website, he is one of his generation’s pivotal figures in music and the related arts. [Jazz and blues magazine] Downbeat praised the “nimble touch, measured stride and warm harmonic vocabulary” he employs to communicate with other musicians and audiences at what he terms “the deepest level of humanity and individuality.” Leader of the “Emmet Cohen Trio” and creator of the “Masters Legacy Series,” Cohen is an internationally acclaimed jazz artist and dedicated music educator. Cohen, who started playing the piano at age 3, is the winner of the 2019 American Pianists Awards. ‘Jazz?’ you might ask. While I rarely listen to jazz and admittedly don’t know much about it, this doesn’t mean I don’t like it. In fact, Symphonic Rags from Cohen’s new album Future Stride, which came out yesterday, grabbed me immediately – I dig the bouncy groove, which makes you want to tap your foot right along or snip your fingers!

Kiwi jr. are an indie rock band from Canada formed in 2015. Their Apple Music profile notes, made up of guitarist/vocalist Jeremy Gaudet, drummer Brohan Moore, bassist Mike Walker, and second guitarist Brian Murphy, the band’s sound was one part Pavement’s snarky melodicism, one part C-86 jangle, and sprinklings of restless wit in their lyrics about house parties, strange friends, and suburban landscapes. The band moved to Toronto shortly after forming, integrating themselves in the music scene there. Murphy split his time between playing guitar with Kiwi Jr. and bass in Alvvays, as the former band worked on their debut album between 2016 and 2017. In 2019, Kiwi jr. signed with Mint Records and released their debut album Football Money last year. Cooler Returns is the title track of the band’s sophomore album that came out on January 15.

Let’s wrap things up with Passenger, the stage name of British folk pop singer-songwriter Michael David Rosenberg. According to his Apple Music profile, he took classical guitar lessons as a kid and eventually brought those skills to the streets to busk around England and Australia after leaving home at age 16. Upon returning to Brighton, he co-founded the folk-rock band Passenger in 2003. They released just one album before calling it quits, but Rosenberg, the group’s main songwriter, stuck with the name. He officially went solo as Passenger in 2009 with Wide Eyes Blind Love, a stripped-down acoustic set evoking the intimate storytelling of David Gray. Since, he’s been highly prolific, releasing 10 albums in his first decade alone, carefully tweaking his sound every step of the way. Remember to Forget is from Passenger’s 12th solo album Songs for the Drunk and Broken Hearted, which appeared on January 8.

6 thoughts on “Best of What’s New”