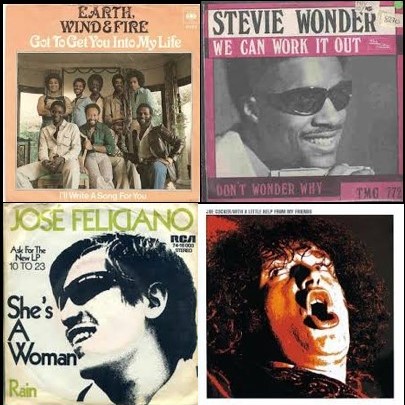 What do you do in music when you run out of ideas? Get “inspired” by the work of others and claim it as your own ingenious creation. And get good legal representation. Just ask Led Zeppelin!

For any first time visitors, I totally dig Zep and Stairway To Heaven. I’m glad they recorded that song, which probably is my most favorite rock tune. Messrs. Page and Plant just should have given credit where credit was due, even if ripping off Taurus by Spirit was a subconscious act. Okay, ’nuff going on a tangent, this is supposed to be a happy post. And guess what? It totally was my idea! 🙂

This morning, I watched a clip of a Paul McCartney appearance on The Late Show with Stephen Colbert. At some point, Colbert noted many other artists had done covers of Beatles songs, adding he believed Yesterday was the most covered tune. He then asked McCartney about his favorite version. Thinking about Yesterday, McCartney mentioned Elvis Presley, Frank Sinatra and his favorite, Marvin Gaye. Then I completely erased the clip from my memory.

Fast-forward 30 minutes. I’m sitting at my computer, and suddenly out of nowhere, a flash of ingenuity hit me. What if I did a playlist of Beatles songs covered by other artists? What a brilliant and original idea, I thought, so here it is!

Got To Get You Into My Life (Earth, Wind & Fire)

Essentially, this was an homage to Motown, which The Beatles recorded in 1966 for the Revolver album. In July 1978, Earth, Wind & Fire released a fantastic cover of the tune as a single. It also was part of the less than stellar feature film Sgt. Pepper’s Lonely Hearts Club Band. Feel free to snip along!

I trust this song needs no further introduction. What you may not have known is that none other than the fabulous Marvin Gaye recorded a take of the timeless ballad. And when Marvin sang, magic happened most of the time. He included his version of Yesterday on his tenth studio album That’s The Way Love Is from January 1970. Just listen to this – makes me feel like floating in space!

We Can Work It Out (Stevie Wonder)

We Can Work It Out is a non-album single The Beatles issued in December 1965 as a double A-side with Day Tripper. Stevie Wonder liked the song and decided to record a take for his August 1970 studio album Signed, Sealed & Delivered. Who can blame him? According to Wikipedia, Wonder performed the tune for McCartney on various occasions. Even if you’re Paul McCartney, it’s gotta be cool to witness Stevie Wonder playing one of your songs!

This is one of my all-time favorite Beatles tunes and another track from the Revolver album. I also dig this cover by Ray Charles, which he recorded as a single in 1968.

In My Life (Johnny Cash)

In My Life is one of the most beautiful and moving songs John Lennon has written and a standout on the Rubber Soul album, in my opinion. Gosh, I can’t deny this tune gets me every time! At first, I wanted to feature the cover by Bette Midler, a fantastic vocalist. Then I came across this take by Johnny Cash, which blew me away. There’s perhaps nobody better than the Man in Black when it comes to conveying raw emotion and vulnerability, especially during the later stages of his career. This take is from American IV: The Man Comes Around, a studio album released in November 2002, about 10 months before he passed away.

José Feliciano is an artist I’ve admired for many years, not only because of his outstanding guitar-playing, but also because of great covers he has done and how he has made them his own. Check out this amazing version of She’s A Woman, which The Beatles initially released as the B-side to their I Feel Fine single in November 1964. Feliciano’s take also first appeared as a single, in 1969. I love how he gave it a Latin jazz type groove.

If I Needed Someone (Roger McGuinn)

If I Needed Someone has become one of my favorite Beatles and George Harrison tunes. And who better to cover it than Roger McGuinn, the man who after seeing George playing a Rickenbacker guitar on TV knew that jingle-jangle sound was made for him and The Byrds. If I Needed Someone is another gem on Rubber Soul. McGuinn recorded his version for his seventh solo album Limited Edition that came out in April 2004. Every time I hear that distinct Rickenbacker sound, I’m getting the same sentiment than listening to a Hammond B3 – I want one. So badly!

I’m leaving you with one more cover, which perhaps is the ultimate rock remake of all time: With A Little Help From My Friends by Joe Cocker. Cocker has recorded strong versions of various Beatles tunes, but this one from Sgt. Pepper’s Lonely Hearts Club Band is the crown jewel. It became the title track of his debut album from May 1969. 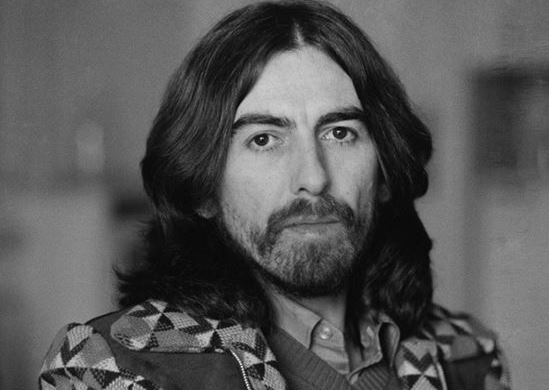 Today, George Harrison would have turned 75 years, so this felt like a great occasion to put together a commemorative piece and playlist. Harrison was born on February 25, 1943 in Liverpool, England. His father Harold Hargreaves Harrison was a bus conductor, while his mother Louise  (née French) was working as a shop assistant. He had three older siblings, two brothers (Harold and Peter) and one sister (Louise).

While growing up in Liverpool, Harrison developed an early interest in music and guitars. His father had reservations about his son’s plans to pursue a music career but still bought him an acoustic guitar in 1956. One of his dad’s friends taught Harrison a few songs. Not surprisingly soon thereafter, Harrison formed his first band with his brother Peter and a friend – a skiffle group inspired by Lonnie Donegan. In 1957 on the bus to his high school, Harrison had a chance encounter that started a life-changing path: Running into Paul McCartney. With their shared passion for music, the two hit if off pretty quickly.

McCartney, who had started playing with another young fellow called John Lennon in The Quarrymen, brought Harrison into the skiffle band in early 1958. By August 1960, the band had adopted rock & roll and following a few name changes evolved into The Beatles. Apart from Lennon, McCartney and Harrison, the initial lineup included Stuart Sutcliffe (bass) and Pete Best (drums). In August 1962, Ringo Starr joined on drums, after George Martin had complained to Brian Epstein about Best’s poor skills. Sutcliffe had left The Beatles a year earlier, which had prompted McCartney to switch from guitar to the bass. The classic line-up was finally in place!

In the early years, Lennon and McCartney dominated the band’s songwriting. While Harrison got his first credit for Don’t Bother Me on the second studio album With The Beatles from 1963, it wasn’t until Help! (1965) that he started asserting himself more as a writer. Help! featured his two compositions I Need You and You Like Me Too Much. Eventually, he introduced Indian influences and other ideas. The Beatles’ music wouldn’t have evolved the way it did, had it not been for Harrison.

Some of Harrison’s other song contributions during The Beatles period included If Needed Someone (Rubber Soul, 1965), Taxman (Revolver, 1966), Within You Without You (Sgt. Pepper’s Lonely Hearts Club Band), Blue Jay Way (Magical Mystery Tour, 1967), The Inner Light (non-album single, 1968), While My Guitar Gently Weeps (The Beatles, aka The White Album, 1968), It’s All Too Much (Yellow Submarine), Here Comes The Sun (Abbey Road) and I Me Mine (Let It Be).

Before The Beatles broke up in early 1970, Harrison had already released two solo records, Wonderwall Music and Electronic Sound, both of which were mostly instrumental. In November 1970, his first post-Beatles solo record appeared, the triple LP All Things Must Pass – a powerful statement that Harrison was finally free from all artistic restrictions!

In 1971, responding to a request from his mentor Ravi Shankar, Harrison organized the Concert For Bangladesh to raise money for starving refugees in the war-ravaged country. In addition to him and Shankar, the charity event in New York’s Madison Square Garden on August 1st featured an impressive array of other artists, such as Eric Clapton, Ringo Starr, Leon Russell, Billy Preston and Bob Dylan. It attracted more than 40,000 visitors and raised close to $250,000 (about $1.55 million in today’s money), and essentially introduced the concept for Live Aid and other music charity events. 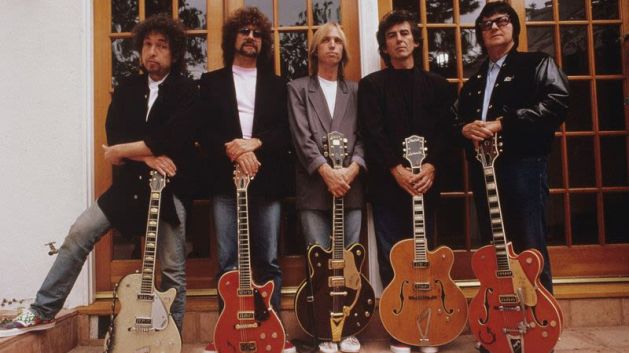 Wah-Wah appears on All Things Must Pass, which is widely considered to be Harrison’s best solo album. It also became his most successful solo release, topping the charts in the US, UK, Canada, Australia and various other countries.

Here Comes The Sun is one of Harrison’s compositions from The Beatles period and one of my favorite tunes from the Abbey Road album. The following clip captures his live performance during the Concert For Bangladesh, together with Badfinger lead vocalist and guitarist Peter Ham.

The Lord Loves The One (That Loves The Lord) is from Harrison’s forth studio album Living In The Material World, which appeared in May 1973.

Dark Horse is the title track of Harrison’s fifth studio record from December 1974.

Crackerbox Palace appears on Thirty Three & 1/3, Harrison’s seventh studio album from November 1976. The tune, which features a slide guitar sound that had become a Harrison signature, was also released as the record’s second single in January 1977.

Blow Away is included on Harrison’s eponymous 8th studio album, which came out in February 1979. The song also appeared separately as the record’s lead single a few days ahead of its release.

Got My Mind Set On You, composed by American songwriter Rudy Clark, is from Cloud Nine. Released in November 1987 after a five-year hiatus from the music business, Harrison’s 11th studio album became a successful comeback, reaching no. 8 on the U.S. Billboard 200 and climbing to no. 10 on the UK Albums Chart. Got My Mind Set On You was also the record’s lead single and reached the top of the Billboard Hot 100.

If I Needed Someone is one of my favorite Harrison compositions and Beatles tunes. It appears on the band’s sixth studio Rubber Soul, released in December 1965. The following clip is from Harrison’s 1992 Live In Japan album, which features Clapton and a terrific backing band.

I’d like to conclude this post and playlist with Any Road from Brainwashed, released in November 2002. Harrison’s final solo album took about 14 years to complete. After he had started work in 1988, things got delayed due to business problems with his former manager Denis O’Brien, his work with the Traveling Wilburys and Ravi Shankar, and his involvement in The Beatles Anthology albums. In 2001, Harrison underwent surgery for lung cancer and radiotherapy for cancer that had metastasized into his brain. He continued to work on the album as long as he could and left instructions for Dhani and Lynne to complete things. Harrison passed away at a friend’s house in Los Angeles on November 29, 2001. He was 58 years old.